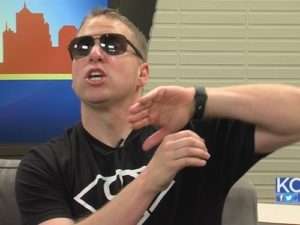 Gary Owen has been entertaining American audiences for more than a decade with his side-splitting comedy. He’ll be performing Thursday, March 23rd, 8:00 PM, in the Egyptian Room at the Old National Centre.

Since getting his start in standup comedy on BET’s ComicView, Owen has starred in the hit movie Think Like A Man (2012) and it’s successful follow-up Think Like A Man Too (2014), as well as made appearances in Little Man (2016), Daddy Day Care (2003) and College (2008). Having performed to sold-out audiences in all major comedy clubs and theatres across the country, Owen is one of America’s most beloved comedians.

Gary was always the class clown growing up in Cincinnati.  After high school, he enlisted in the Navy, and was chosen for the prestigious Presidential Honor Guard.  After leaving his ceremonial position, Owen became a military police officer at the Naval Installations on Coronado Island in San Diego, but he made only two arrests in three years.  During that time, he embarked on his true calling: stand-up comedy.  After just one year of stand-up, he was named “Funniest Serviceman in America.”  Owen had a huge African-American fan base, and went on to win the “Funniest Black Comedian in San Diego” contest.  In addition, Ebony magazine has proclaimed Gary “Black America’s Favorite White Comedian.”

Tickets are on sale now.  All seats are $37.50, and they are reserved.  Contact the Old National Centre box office.