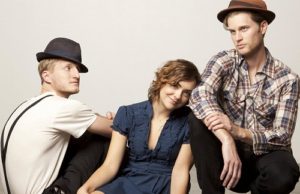 The Lumineers will perform on Friday, March 10 at 7:00 p.m. in downtown Indianapolis at Bankers Life Fieldhouse with special guests Kaleo and Susto.

The Lumineers are touring to support their sophomore effort, Cleopatra, which has garnered critical acclaim and whose singles have raced up the Triple A and Alternative Charts.

A scruffy, independent Americana trio out of Denver, their irresistible anthem “Ho Hey” took the world by storm in 2012.  Their journey took them from the Grammys to the presidential iPod — from the top of the top of the charts to the Hunger Games.  Their self-titled debut album became a multi-million seller as they stormed stages around the world and legions of new fans fell in love with the wide emotional and philosophical range of their rich, lyrical songwriting.

‘Cleopatra’, the band’s second single from their new album, went top 5 at the Triple A format following in the footsteps of hit single ‘Ophelia.’  ‘Ophelia’ also debuted on the Hot AC chart, following its record 13 week No. 1 run at Triple A (2nd most played single ever at the format) and four weeks No. 1 at Alternative. It was the band’s third single at Alternative to go No. 1. Ophelia was also one of the the most played songs in 2016 at the Triple A and Alternative formats.

Cleopatra was the first No. 1 Billboard charting album from an indie label (Dualtone, an Entertainment One Company) in 2016, and is a major hit overseas with the album ringing up No. 1 sales in the UK, Canada, and South Africa to go along with the US top rank.

Tickets are available at Bankers Life Fieldhouse Box Office, any Ticketmaster location, or by calling 800-745-3000.