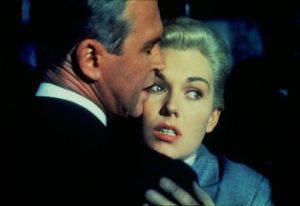 When Alfred Hitchcock’s Vertigo was released in 1958, it met with little success.  Reviews were mixed, and it barely broke even.  But its stature has increased during the intervening years – to the point where the British Film Institute’s Sight & Sound critics’ poll rated it the best picture ever released in 2012.  Now, I’m more inclined to rate Psycho and North by Northwest as the greatest Hitchcock films, relegating Vertigo to that second tier of “very good, but not great.”  Still, Vertigo never ceases to impress upon repeated viewings.

In Vertigo, Hitchcock regular James Stewart plays Scottie Ferguson, a San Francisco police detective forced to take early retirement upon developing a severe fear of heights following the death of a fellow officer during a rooftop chase.  An old friend asks Scottie to follow his wife Madeleine, fearing she may be having an extra-marital affair.  After rescuing Madeleine (Kim Novak) from an apparent suicide attempt, Scottie and Madeleine proceed to have an affair of their own.  Yes, all-American good-guy Jimmy Stewart having an affair.  And suffering from vertigo!  Hitchcock certainly knew how to get a rise out of the casual filmgoer – much as Jonathan Demme did in 1993 when he cast all-American good-guy Tom Hanks as a gay man in Philadelphia. 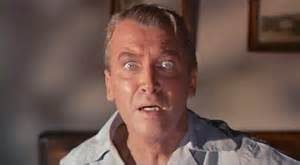 Madeleine is eventually successful in a subsequent suicide attempt in which she jumps off the top of a bell tower at an old Spanish mission, and Scottie falls into a deep funk, as he was unable to save her due to his illness.  After a stint in a sanatorium (Yes, Jimmy Stewart!), Scottie runs into a Madeleine lookalike named Judy.  Ultimately, Judy is revealed to have been impersonating Madeleine as part of a murder plot.

And thus we have our classic Hitchcock set-up – an innocent man caught up in a large and terrifying plot.  Nobody carried out this role with more aplomb than Cary Grant in the following year’s North by Northwest, but Stewart is very good – although at age 50, he was far too old for a romantic entanglement with 25-year-old Novak (but that’s another complaint for another day).

Vertigo is not only a mystery classic from the master of suspense, but it marked the first use of the “dolly zoom” – a cinematic technique in which the camera focuses in tightly on the subject (Stewart, in this case), while rapidly moving toward or away from that subject.  The result looks like the person is falling away from the camera or rapidly moving toward it – an effect classically spoofed by Mel Brooks in 1977’s High Anxiety.

Even when Hitchcock’s camera is not in dolly zoom mode, it’s a fairly “active” camera for him.  Unlike Hitchcock’s earlier work, the often leisurely-paced middle is filmed with a mobile camera following its subjects – as opposed to a static camera focused on subjects moving around within a rectangular frame.  For example, when Scottie trails Madeleine through Cypress Point on Monterey, the camera moves with him, giving us the feeling of constant motion.  This is undoubtedly a technique used to exemplify his acrophobia, but it also serves to involve us more in the action, even when that action is relatively passive.

As the proverbial everyman, Stewart’s decline into a depressive state of madness brings us with him.  We feel his pain, even if we’ve never been involved in a scheme as complex as this.  Credit screenwriters Alec Coppell and Samuel Taylor, working from a 1954 French novel, “The Living and the Dead” by Pierre Boileau and Thomas Narcejac.  There isn’t much to dislike in Vertigo, although the middle section tends to drag.  The Northern California scenery (featuring Muir Woods and the Monterey Peninsula) is beautiful, however, even when the story slows.

Novak was never better.  She’s beautiful and wise – anything but the damsel in distress as Judy, yet fearful and possessed as Madeleine.  Barbara Bel Geddes (another Hitchcock favorite) turns up as Scottie’s friend who attempts to cure him of his acrophobia (fear of heights and vertigo).  Also keep an eye out for young character actor Henry Jones (You’ll know him when you see him.) as the coroner.

Fortunately, we have the chance to revisit Vertigo March 10th and 11th at the Historic Artcraft Theatre in downtown Franklin.  Shows are at 2:00 PM and 7:30 PM on Friday and Saturday.  Tickets are $3.00 and $5.00, and can be purchased at the Artcraft’s website.