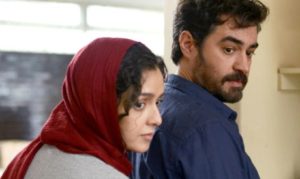 I suppose it was inevitable that The Salesman win this year’s Best Foreign Language Oscar the other week.  By not attending the ceremony, Iranian director Asghar Farhadi’s absence highlighted his protest (and that of his countrymen, and of Muslims worldwide) against the Trump administration’s plan to ban entry to the United States from seven sovereign Arab nations that purportedly sponsor terrorism.  Oscar voters apparently wanted to make a point, so they awarded Farhadi.  Never mind that The Salesman, while certainly a good film, is not up to par with his 2011 offering The Separation, which became the first Iranian picture to land the Best Foreign Language Oscar five years ago.

The Salesman follows the life of Emad and Rana (Shahab Hosseini and Taraneh Alidoosti, in a marvelous performance), a childless thirtysomething Iranian couple forced to flee their dilapidated apartment one night due to construction causing the building to collapse.  Emad is a local high school teacher, and at night he’s rehearsing a production of Arthur Miller’s “Death of a Salesman.”  Emad plays Willy Loman and Rana plays his wife Linda.

Eventually settling into a temporary top-floor apartment, Rana is attacked one day while taking a shower.  The landlord advises them that the previous tenant was a woman of ill repute, and that the intruder was likely one of her johns.  Not wanting to humiliate herself by telling her story to the police, Rana suggests Emad set out to find the culprit himself.

Now I know what you’re thinking.  She did NOT inform the police?  Correct.  But remember, this is Iran.  Not only are the authorities not held to the same high standard as in most first world countries, but the poor building codes (including that of their first apartment) are also underscored.

Furthermore, unlike in this country in which counseling is only a phone call away, the public shaming of a sexually assaulted Arab woman is almost too much for Rana to comprehend.  Although she and Emad tell only very few others, Rana is beset with guilt – even breaking down during a performance.  In male-dominated Arab culture, the woman is perceived to carry a certain level of guilt – for making herself too attractive and available to her stalker.  Never mind that the intruder entered her apartment while she was in the shower.

While Farhadi almost can’t help noting these cultural and societal differences between Arabs and first world citizens, I’m always intrigued by the similarities he accentuates.  For example, Iran does having a thriving theatre and arts scene.  This is not a contrived plot element, designed to “soften” Iran for world consumption.  And Emad’s students are about as disruptive as those in most American schools – that is to say they can be trying, but typically not in a destructive manner.  The students seem to genuinely enjoy Emad’s class, and he invites them to see his play.

My favorite scene occurs when Emad asks his students how many of them are familiar with “Death of a Salesman.”  Not one hand is raised.  I found this more a commentary on their generation than I did on their culture.  I can’t imagine a lot of American high schoolers would be familiar with it either.

Obvious correlations between the Miller play and Farhadi’s film are strewn throughout.  Most notable is the ending, in which we see Rana’s Linda Loman weeping over the casket of her deceased husband Willy.  This scene is coupled with that of Emad’s capture of Rana’s attacker.  Rather than turn him over to the authorities, Emad demands he apologize to his own family (who of course know nothing of his extramarital dalliances).  Rana believes Emad is going too far.  Farhadi masterfully handles this climax.  On the one hand, we feel sorry for the attacker, yet Farhadi’s screenplay never lets us forget what he’s done.

Emad is a man.  Therefore, he is a problem-solver.  He’s not particularly comforting to Rana.  In his mind, Rana will snap back to her old self if he simply finds her attacker.  And this is perhaps the greatest similarity amongst all cultures.  Did I mention that men are from Mars and women from Venus?  Rana desperately needs someone to sympathize with her needs – and Emad leaves her needs unfulfilled.  Now go back and read (or watch) “Death of a Salesman” and note the similarities.