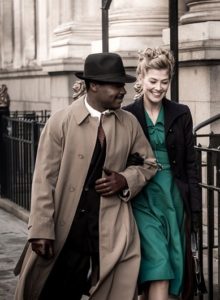 I was not particularly excited to see Amma Assante’s A United Kingdom – a true story of the heir to the throne of Botswana and his white wife.  I figured if it had been as good as Loving, it would have been released in time for the Oscars.  Instead, Assante has created the first great film of 2017, and one I hope Oscar voters remember a year from now.

David Oyelowo (Martin Luther King in Selma) plays Sir Seretse Khama, sent to London for his formal education, and to learn the ways of the “outside” world.  Upon completion of his degree(s), Seretse is to return to his native land (then known as Bechuanaland) and take over the throne abandoned by his father upon his untimely death when Seretse was a three-year-old.  During the intervening years, Seretse’s uncle Tshekedi (South African actor Vusi Kunene) has served as Bechuanaland’s regent – an interim king, if you will.

But before returning to his country he falls in love with a young British office worker named Ruth Williams (Rosamund Pike).  Once made aware of Seretse’s future, Ruth surprises him by agreeing to join him in Africa.  Knowing that their interracial relationship would be scorned, Seretse and Ruth are married in London prior to their return.

Predictably, both families and both governments (Great Britain’s and Bechuanaland’s) oppose the Khamas’ union.  And it was at this point when I assumed I knew the rest of the story.  I was wrong.  Unlike Jeff Nichols’ Loving, the bulk of A United Kingdom does not concern the Khamas’ relationship.  It is not a love story.  It is a story of independence from British rule by a protectorate whose citizens were forced to pay taxes yet continued to live in abject poverty.  The British government used the “illegal” union of a black African prince and a white British citizen as their excuse to control Bechuanaland on the verge of the discovery of precious minerals in that part of the world. 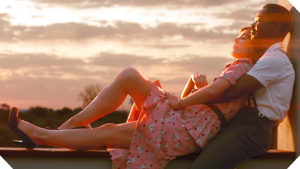 Seretse is forced to live in exile in Great Britain (first without Ruth, then with), as the British wrest increasing control from the citizens.  Seretse utilizes the media and his swelling support back home to claim his rightful power and call for democratic elections.  His is no small task, and he responds admirably to a crisis situation.

Oyelowo’s African accent is every bit as perfected as Will Smith’s in Concussion, and for those who know Rosamund Pike only from 2015’s Gone Girl, she really is British.  Her accent in A United Kingdom is actually hers.  These two excel in these roles, particularly in the ways in which their characters curry favor with the locals who originally reject them because of the interracial amalgamation.  Seretse uses his skills as an orator to turn attention away from his personal life and onto the saving of the nation.  Ruth dresses like the local women, shops at the same stores, and helps them whenever she can – eventually becoming as popular amongst Bechuanaland’s women as her husband is among the men.

Jack Davenport (Pirates of the Caribbean) and Tom Felton (Harry Potter) are pure evil as British government representatives assigned to “manage” Bechuanaland – yet they play their roles with such genuinely British charm as to muffle the sting of many of their decisions affecting the Khanas.  South African actress Terry Pheto is outstanding as Seretse’s noble sister, who breaks from the rest of her family early, to support Ruth and guide her engagement into African culture and society.

It’s a strong cast, and the script is good.  Screenwriter Guy Hibbert occasionally overdoes the sentimentality – the music becomes prominent at predictably opportune times – manipulating our reactions a little too much, but the content of the material is solid, and it’s a story with which most of us are not familiar.

Not good time for release

After seeing it, I realize A United Kingdom might have become lost in the shuffle had it been released in time for Oscar consideration.  It probably would have worked better had Fox Searchlight Films waited for a summer release – thereby making it perhaps the only “adult” film in a sea of superheroes.  But in any event, A United Kingdom is a winner, and deserves to be seen.