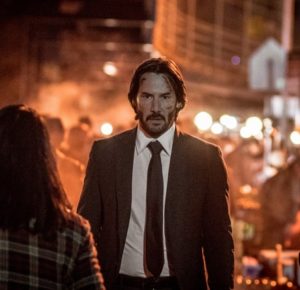 John Wick: Chapter 2 feels like – well, it actually feels like a “Chapter 2” to the story started in 2014’s original. It picks up where the first movie left off in both events and theme, and deepens both Wick’s character and the world of assassins he inhabits. It’s not perfect, but it’s interesting, a cut above the usual action sequel.

John Wick (Keanu Reeves), the uber-assassin known to the underworld as “the boogeyman,” has once again buried his gun and his life as a killer along with it. But then an old debt comes calling in the form of Santino D’Antonio, a fellow assassin. D’Antonio is the man who made Wick’s retirement possible – and thus there’s no refusing his request. Wick has to (reluctantly) descend into the underworld he tried to hard to escape.

Too much down time

Chapter 2 is a bit of a deep-dive into a mythology that worked well in the first movie when it catered to the whims of the lighting-fast plot, but doesn’t quite hold up when put under the stress of carrying the entire narrative. There are definitely sequences that are slow, cartoonish, less interesting – dull interludes between the slam-bang action set pieces that continue to be some of the best around.

Director Chad Stahelski and cinematographer Dan Laustsen know action and how to frame it, how to pace it – in a way, they feel like the first truly ‘FPS’ generation of action filmmakers. Certainly the basic ‘mission to mission to boss battle’ structure adopted by shooting games has seen a lot of success in action cinema, but the Wick movies are the first to tap into the raw, sensory pleasure that comes with mastering the motions of an FPS game – how it feels when your fingers dance, your subconcious controlling very click and triggerpull. Bodyshot, headshot, bodyshot, headshot, roll, duck, cover – the way Stahelski & Laustsen pace it feels right out of a video game. It’s smooth, almost weightless, inherently and deeply pleasing – a dance.

The action in John Wick 2 is longer, more complex, but nonetheless just as exciting as the first. What sets Chapter 2 apart from similar action movie sequels is that rather than re-treading the first, it re-examines the character in a not-so-positive light. Once again we watch Wick superhero up as he gets a new suit, new guns, plots a new crime, but underlying all of it is the question: why? What is he fighting for? Wick doesn’t want the life, the life wants him, and the only way he knows how to solve the problem is with blood and lead, which only creates more and more problems. Suicide isn’t an option – he fears damnation just as much as he fears redemption. Wick is a monster in a maze of his design, trapped with no way out.

By making this conflict text, it’s almost as though writer Derek Kolstad is examining the very problems inherent in making an action sequel. John Wick was such a masterpiece in stripped-down action filmmaking, but how do you develop a character from that point? Can you? At what point do his methods themselves become suspect, brutish, unheroic? It’s a question that plagues John Wick: Chapter 2, and it’s what makes it unique.