Quick.  How many Oscars did Humphrey Bogart win?  Well, gee Andy.  It had to have been a lot.  I’ll say three.  No, you’re not even close.  Okay, four.  Nope.  One of the greatest motion picture actors of all time, Bogart was the recipient of a grand total of one Best Actor Oscar.

It was for Casablanca, right?  Had to have been.  Nope.  While Casablanca won Best Picture of 1943, Paul Lukas walked away with the statuette that year for Watch on the Rhine.  Well, how ‘bout The Maltese Falcon?  Bogey took home the gold for that one, right?  No, that was 1941, and Gary Cooper won for Sergeant York.  The Big Sleep?  Nope.  Fredric March in The Best Years of Our Lives.  Okay, one last guess.  It’s gotta be for Treasure of the Sierra Madre.  Again, no.  That was the year Sir Laurence Olivier won for Hamlet. 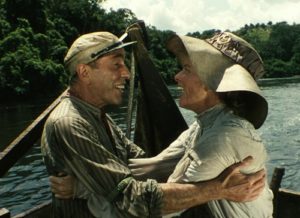 Okay, I give up Andy.  For what picture did Bogey bring home the gold?  Ahhh, that would be John Huston’s The African Queen, in which he starred as a rough-and-tumble Canadian boat captain named Charlie who rescues a British missionary at the outset of World War I.  After a decade as perhaps America’s greatest film actor, the Academy finally saw fit to award him their Best Actor Oscar for this classic, which will show February 10th and 11th at the Historic Artcraft Theatre in downtown Franklin, Indiana, as part of their classic film series.

Even if you’ve seen it before, The African Queen is always a delight, as it pairs Bogey with one of our greatest actresses, Katherine Hepburn.  She and Robert Morley play brother and sister British Methodist missionaries in German East Africa when the war breaks out.  Deciding their work is too vital for them to leave, Samuel and Rose stay in Africa, only to see their village destroyed by the Germans.  Samuel eventually dies after being beaten by a German soldier.  Enter Bogart’s Charlie, who warns Rose the Germans are patrolling the nearby lake with a gunboat.  Instead of begging Charlie to transport her to safety, Rose concocts a plan to torpedo the German boat, and eventually convinces him to go along.

Charlie and Rose face many obstacles, including enemy fire from a German fort, ever more dangerous river rapids, muddy sandbars, and leeches.  It’s the classic buddy movie, complete with a mismatched pair brought together via a common goal.  Charlie is perturbed by Rose’s glowing determination, while Rose dislikes Charlie’s drinking.  The scene in which she dumps Charlie’s gin into the river is one of the greatest in American cinema.

If this plot seems like a clever way to enmesh Kate and Bogey into over an hour of “alone” screentime, so be it.  These are two of the greatest actors to ever grace the screen, and watching them is a treat which simply cannot be measured.  I do still feel the happy Hollywood ending is contrived, so I can’t put it in the class with some of Bogey’s other classics.  But that’s a minor quibble with a film selected for preservation in the National Film Registry in 1994.

The Artcraft will be showing The African Queen this Friday and Saturday and 2:00 PM and again at 7:00 PM.  Tickets are $3.00 and $5.00, and can be purchased in advance on the theatre’s website, or at the show.  This is an opportunity to witness one of the classics of the Hollywood studio era.  It still resonates after all these years, and it’s always worth another view.