The Indy Fuel and Dub3TV present a Murat Movie Night Double Feature, featuring hockey films The Mighty Ducks and The Cutting Edge.  These family favorites will be shown Friday February 17th at 7:30 PM in the Egyptian Room at the Old National Centre. 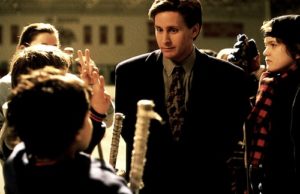 In the 1992 family comedy The Mighty Ducks, Emilio Estevez plays young and reckless lawyer Gordon Bombay, who gets arrested for drunk driving, and is then ordered to coach a children’s ice hockey team for his community service.  Although Bombay has experience on the ice, he is not too eager to return to the sport due to his tense history with his own former coach Jack Reilly (Lane Smith).  Throughout the film, Bombay learns to appreciate his young team, including the talented player Charlie Conway (Joshua Jackson), eventually taking on Reilly and his toughest players. 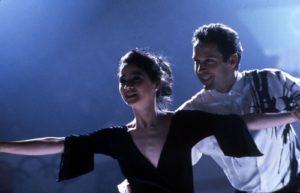 In the 1992 romantic comedy The Cutting Edge, NHL prospect Doug Dorsey (D.B. Sweeney) is injured in an Olympic hockey game, leaving him unable to play professionally, while ill-tempered figure skater Kate Moseley (Moira Kelly) is left with no skating partner after a fall in the same Olympic games. All out of options, Moseley’s coach brings in Dorsey as her new partner, even with the hockey player’s lack of figure skating experience. Although Moseley is less than thrilled with this change, the two grow to respect one another, finalizing a routine for the U.S National championships, and eventually the Olympics, with hopes of winning the gold.

Tickets for this fun night of celluloid hockey are $10.00 at the door.  But Family Fun-Packs are on sale now — $30.00 for four tickets!  See you at the Egyptian Room.