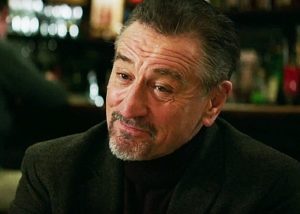 While he typically plays the heavy, Robert DeNiro is certainly capable of comedic performances (see Midnight Run, Wag the Dog, and Silver Linings Playbook).  So if you knew DeNiro were to play an aging stand-up comedian in a film produced by Hollywood producer/historian Art Linson, you might be interested in seeing it.  Don’t be fooled.  The Comedian poses quite a quandary – it’s a movie about a comedian (and it stars a host of real-life comedians playing themselves), yet it has not one single solitary laugh.  It is not only unfunny, but it is embarrassingly unfunny.

DeNiro plays Jackie Burke, a guy who’s been doing stand-up so long he could do it in his sleep.  Jackie had a hit television series 30 years ago called “Eddie’s Home.”  And everyone loved that show.  When fans notice Jackie in public, all they want to talk about is “Eddie’s Home.”  They often ask him to recite famous lines from the show – not even realizing that Jackie’s first love is stand-up comedy.  Always has been.  Always will be.  And he hates the fact that his career is defined by a 30-year-old television series.

This sounds like an interesting set-up.  But then we get to see Jackie’s comedy.  It’s all blue – sex jokes, bodily function jokes, mean-spirited jabs at his own audience members.  His act is completely devoid of the observational humor that endears us to Jerry Seinfeld and George Carlin.  It contains no political humor, a la Bill Maher or Jay Leno.  He doesn’t do funny impersonations, like Dana Carvey or Jimmy Fallon.  Just once, I wanted him to ask, “Do you ever wonder why they promote the vending machines at highway rest areas over the more important restroom facilities?”  Or something of that nature.  Anything mildly humorous will do.

So we have a washed-up comedian with nothing funny to say.  Add to that an attitude (particularly against those who pay to see him) which lands him in jail for 30 days, and we now have an unfunny and downright dislikable comedian.  Post-incarceration, he meets a girl half his age (Leslie Mann) while fulfilling his community service requirement at a Catholic food pantry.  The fact that anyone would take a romantic interest in this lout is preposterous – particularly given their age difference.  I typically don’t like screenplays in which a love story is thrown in for no good reason (such as in Hoosiers).  But here, the courting scenes at least serve the function of taking us away from the so-called comedy.

But alas, The Comedian is in fact a picture about a comedian performing comedy.  And therefore, it should be judged, in large part, on its laugh count.  If asked, I would actually give it a negative laugh count.  Not only did I not laugh, but DeNiro/Jackie embarrasses himself and his audience (those on film and those in the theatre) several times – at a Jewish wedding reception, at a Florida retirement community, and in the very last scene (which is so awful I can’t begin to describe it).  And after practically destroying the otherwise marvelous 2015 picture Joy with a shamefully bad speech at a wedding reception, hasn’t DeNiro exhausted the uncomfortable wedding guest routine by now?

And perhaps this is a minor quibble, but DeNiro’s brother is played by Danny DeVito (who looks absolutely nothing like DeNiro), and DeVito’s wife is played by Patti LuPone.  And it’s their daughter whose Jewish wedding Jackie ruins.  DeNiro, DeVito, LuPone.  Could director Taylor Hackford not have found some Jewish actors to fill these roles?  Either that or simply change Linson’s screenplay to an Italian Catholic wedding?

The great Charles Grodin and the great Harvey Keitel are wasted in supporting roles, and the real-life comedians playing themselves (including Jimmie Walker, Billy Crystal, and Richard Belzer) are given nothing funny to say.  Even Edie Falco is only mildly entertaining as Jackie’s long-suffering agent Miller, who’s at her wit’s end trying to find venues which will actually let him perform.

Occasionally in my reviews, I’ll suggest a certain screenplay needs “one more run through the editing mill.”  Here, the screenplay needs to be torn up, thrown out, and sufficiently destroyed, before employing a new writer who could have worked wonders with this outstanding cast.  Jeff Ross, Richard LaGravenese, Lewis Friedman, and Linson himself are responsible for this mess, and they should be ashamed.

As for DeNiro, the knock against him is that he works too hard; that he churns out too much material; that he should be more selective in choosing good projects.  The Comedian serves as Exhibit A in showing us one of now quite a few terrible pictures DeNiro has chosen recently.  Since his skillful cameo in David O. Russell’s 2013 masterpiece American Hustle, DeNiro has starred in some real junk (including last year’s Dirty Grandpa).  Unfortunately, The Comedian does nothing to pull him out of his funk.