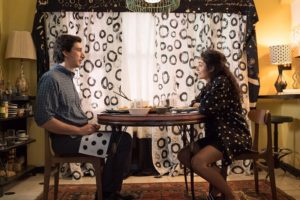 Writer/director Jim Jarmusch has been making independent films for 30 years, but only a few of them are household names.  His latest, Paterson, will probably be his biggest success, but it’s still anything but a conventional narrative.  Heretofore, audiences probably know Jarmusch best from the 2005 Bill Murray vehicle Broken Flowers, in which the protagonist searches the country for his former girlfriends in an attempt to find a 19-year-old son he’s never met.  That was as close to a plot as you’ll get from Jarmusch.

Paterson is a whimsical slice-of-life dramedy about a Paterson, New Jersey bus driver (named Paterson, ironically) who dreams of becoming a poet.  His wife Laura stays home in their small house, dreaming of becoming a chef, artist, or even a country and western singer.

To say that Paterson’s life is humdrum would be an understatement.  His wife packs his lunch, he walks to the bus terminal, spends the day driving, listening to the mostly uninteresting conversations of his riders, while writing observational poetry during his down time.  He walks home, eats dinner with Laura, walks his English bulldog, and has a beer at the corner watering hole.  And yes, the bartender (who sort of has the face of a human bulldog) and patrons all know one another.  They include an aspiring actor who purportedly loves a regular female customer, and two pool-shooting brothers named Sam and Dave.  The bartender’s wall is covered with photos of famous Paterson natives, including Lou Costello and Hurricane Carter.  Paterson’s life is so mundane that he doesn’t even need an alarm clock.  He automatically awakens at about the same time every morning.

And, as with many Jarmusch screenplays, that’s the whole plot!  Paterson’s life is as predictable at the end of the film as it is at the beginning.  Some viewers will find this structure frustrating.  But remember that Paterson is nothing more than a slice of everyday, urban life.  It reminds me of Tom McCarthy’s restrained 2003 indie classic The Station Agent.  At first I wanted to move the story along.  Until I realized there was no story to move.

As Paterson, Adam Driver gives the finest, albeit understated, performance of his young career.  And Iranian actress Golshifteh Farahani practically steals the show as spunky Laura.  She has a thing for black and white painting.  As Paterson progresses, Laura’s clothes become an oddly-patterned array of black and white.  Then the housewares and furnishings take on that same artistic style.  Then the walls and rugs.  It’s the funniest running joke in the picture.

Although that day never comes (at least during the week we spend with them), I’ve never had more fun with two less interesting characters since…  Well, since The Station Agent.

Jarmusch is a master with this kind of material.  Rather than bowling us over with plot twists and turns, he merely allows us to eavesdrop on the lives of regular, workaday Americans.  And the result is that we’re left wondering if our lives are any more interesting than those of his characters.  Are our dreams any less outlandish than theirs?  How would a film about my life compare?  Mr. Jarmusch, are you reading this?