Recognized as one of the very finest period instrument ensembles, the Venice Baroque Orchestra receives wide critical acclaim for its concert and opera performances throughout the world as they showcase their commitment to the rediscovery of 17th and 18th-century masterpieces.  They will appear at the Palladium Saturday, February 18th at 8:00 PM. 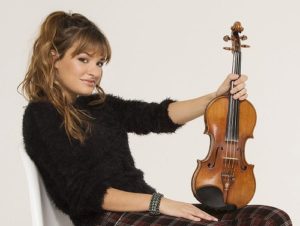 This concert will feature Nicola Benedetti, one of the most sought after violinists of her generation, performing Antonio Vivaldi’s The Four Seasons.

Founded in 1997 by Baroque scholar and harpsichordist Andrea Marcon, the Venice Baroque Orchestra is recognized as one of the premier ensembles devoted to period instrument performance.  The Orchestra received wide critical acclaim for its concert and opera performances throughout North America, Europe, South America, Japan, Korea, Taiwan, and China.  The Orchestra has appeared in many more cities and across the United States than any other Baroque orchestra in history.  They also maintain the most frequent touring schedule to Asia.

The Italian organist, harpsichordist and conductor Andrea Marcon is one of the most acclaimed musicians in early music. Born in Treviso he studied organ and harpsichord with Jean-Claude Zehnderat the Schola Cantorum Basiliensis. In 1986 he won first prize at the organ competition in Innsbruck, and in 1991 the first prize in the harpsichord competition in Bologna.

Contact the Center for the Performing Arts for ticket information.