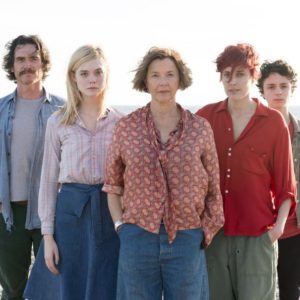 Oftentimes, my favorite movies are those I see without knowing exactly what’s coming.  With no expectations, a good quality screenplay can take me by surprise.  Andrea Arnold’s recent American Honey was such a picture.  At almost three hours in length, I actually wasn’t ready for it to end.  I could have easily stayed with that film for another hour.  By contrast, Mike Mills’ new dramedy 20th Century Women clocks in at under two hours, but I was ready to leave after about 45 minutes.

Inching along like a bad Woody Allen movie (and yes, there actually have been a few good Woody Allen movies), 20th Century Women tells the tale of a middle-class chain smoking 55-year-old divorcee named Dorothea (Annette Bening) and her restless and confused 15-year-old son Jamie (newcomer Lucas Jade Zumann).  The relationship between Dorothea and Jamie is pretty standard stuff.  She’s concerned that he no longer has a father figure in his life.  He wants nothing to do with his mom anymore.  We’ve seen this a lot.

But what makes 20th Century Women unique is that Mills (who also wrote the screenplay) brings three more characters into the picture, a la Woody Allen.  William (Billy Crudup) is an ex-hippie handyman whose current job is rebuilding part of Dorothea’s large old home.  But instead of merely showing up for work each day, William, in fact, lives with Dorothea and Jamie, and rents a bedroom.  Also renting a room in their home is twenty-something punk-rock aficionado and budding photographer Abbie (Greta Gerwig).  Meanwhile, Jamie’s older girlfriend Julie (Elle Fanning) doesn’t actually live with the “family,” but she climbs William’s outdoor scaffolding every night to sleep with Jamie.

While these peripheral characters certainly take the story in an unexpected direction, they also serve to make the situation unbelievable.  What mother would house a twenty-something punk-rocker with dyed red hair in the same house as her impressionable teenage son?  And how can she (or any of them) not know the boy’s girlfriend spends the nights with him?  Does she never have to use the bathroom?  If she does, doesn’t anybody notice her?  And Julie (the girlfriend) is a quandary in and of herself, as she is sexually active, but not with Jamie.  Anybody believe this would actually happen in real life?

Following this odd set-up, various characters begin to have sex with one another.  Or at least talk about sex.  A lot.  And in great detail.  At a dinner party, Abbie feels the need to openly discuss her menstrual cycle, while William and Julie advise young Jamie about the fine points of erotic foreplay.  And Dorothea sits there and smiles.  I realize the point is that she’s more a permissive mother than most, but Mills’ screenplay takes this aspect too far.  She lets Abbie (and later William) take Jamie to a punk-rock bar, and she watches as Abbie give Jamie books about sex.  This isn’t real life.  And if it’s supposed to be funny, it isn’t.

Besides sex, these characters talk endlessly about each other’s feelings and their energies and auras.  Even the answers to simple questions often involve a litany of existential blather.  I was a little surprised to make it all the way through without any mention of biorhythms.

Furthermore, the 1979 setting feels random, save for the punk rock.  I guess the point is that at a time most American kids are into disco, Jamie is part of the punk-rock clique – although since we never see his high school or any of his friends, it’s hard to tell.  We never learn what kind of a student Jamie is – but I’m guessing not strong, because we never see him so much as crack a textbook.

Given the free sex behavior, and William’s interest in yoga, I wonder if 1969 wouldn’t have been a more appropriate backdrop.  Unlike the forthcoming Hidden Figures which perfectly captures 1961, 20th Century Women doesn’t look anymore 1979 than any other picture you’ll see this year.  The old fixer-upper house would look the same in any time period, but even the clothes and hairstyles don’t scream “1979” to me.

Abbie is the most interesting character, and Gerwig makes the best showing of the cast members.  I would have liked to have seen her character in a movie – just not this one.  I feel like a substantial realistic story could have been written around the mother-son relationship between Dorothea and Jamie.  But Mills copped out and gave us what I think is supposed to be an offbeat comedy instead.

Of all this year’s Oscar-contending holiday releases, 20th Century Women is one of the worst.