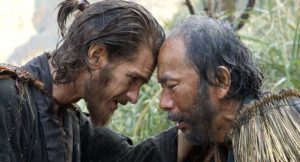 Webster’s defines apostasy as “a defection or revolt,” particularly as it applies to the renunciation of one’s religion.  In his new film Silence, director Martin Scorsese asks if we would commit apostasy against our religion to save other believers from torture.  As a lifelong devout Christian, I would have no problem apostatizing to save others.  I believe Jesus would want me to end their suffering.  But this issue isn’t so cut and dry for 17th century Jesuit priests, who have made public professions of their faith, and are recognized as members of the “consecrated life” – that which binds one to adhere to the Biblical counsels of chastity, poverty, and obedience.

Silence follows two Portuguese priests named Rodrigues and Garupe, who travel to Japan after receiving news that another priest, Father Ferreira, has apostatized.  Upon their arrival, Rodrigues and Garupe are asked to provide sacraments to Japanese Christians who haven’t seen a priest in months.  They hear confessions through the night, and hide in an abandoned shack during the day.  In the 1600s, Christianity was banned by the Japanese government, who felt as threatened by it as the ancient Romans.

After separating from Garupe, Father Rodrigues is captured by the authorities and taken to Nagasaki to face Masashige, a samurai known as “the inquisitor.”  His duty is to search out suspected Christians and torture them.  Rodrigues witnesses the deaths of some of the villagers to whom he has ministered since his arrival.  Later imprisoned, Rodrigues learns that their suffering will not cease until he denounces his own Christian faith.  Such a public showing of apostasy by a church leader is deemed extremely important in the Japanese government’s objective to eliminate Christianity from their nation.

The meat of Silence occurs inside the mind of Father Rodrigues, brilliantly played by Andrew Garfield, who is forced to weigh human suffering against his own vows and beliefs.  In this respect, Silence works as a companion piece to Scorsese’s own 1987 masterpiece, The Last Temptation of Christ – in which Jesus himself considers his own immortality as he suffers on the cross.

This is a heavy topic for a Hollywood movie, and no living director wrestles with theological tenets quite as effectively as Scorsese.  I do find the 17th century Japan setting a bit unique, although he and screenwriter Jay Cocks adapted Silence from Shusaku Endo’s 1966 novel of the same name.  The concept of renouncing one’s beliefs to save others would also highlight the stories of the Jews of Nazi Germany, and the political prisoners of the Soviet Union, among other more recent tragedies.

I applaud Scorsese’s direction for subjecting us to the idea of torture without proverbially shoving it our faces, as Mel Gibson did with the unnecessarily violent Passion of the Christ in 2004.  Here, we see victims drowned, burned, and bound in various methods, but not in an uncomfortable fashion.  Some scenes may be a little difficult to watch, but I never felt like I needed to turn my head away from the screen.

Following his moving turn in 2015’s 99 Homes, Andrew Garfield solidifies his place as one of our brightest young actors.  Adam Driver as Father Garupe and Liam Neeson as Father Ferreira also turn in top-notch performances, but this is really Garfield’s film.  When he grapples with his faith, his facial expressions cause us to reconsider our beliefs as well.  We practically hear Jesus speaking to Father Rodrigues during these scenes.

I can’t say Silence is one of my top five favorite Martin Scorsese pictures, but this isn’t one which causes us to leap from our seats with joy or anger, a la Taxi Driver, GoodFellas, or the more recent Wolf of Wall Street.  This is a richly textured contemplative film, in which much of our “work” as viewers occurs long after the credits have rolled.  It almost begs a second viewing, as we speculate the core dogmas of our own convictions.  It’s the kind of film you’ll think about for days and weeks.  And in this day and age of instantly-forgettable action flicks, that’s a most welcome change.