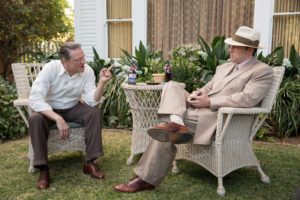 Much as with the so-called War on Drugs, Prohibition did not stop Americans from drinking alcoholic beverages.  Instead, it created a huge underground market for such products – leading to a country full of rum-runners, speakeasies, and gangsters.  Such is the setting for Ben Affleck’s latest directorial effort Live by Night.

Adapted by Affleck from Dennis Lehane’s 2012 novel, Live by Night tells the story of Joe Coughlin, a small-time hood and son of Boston’s police chief (Brendan Gleeson, in his best Irish brogue), who is sent to prison for his part in a botched bank robbery.  Upon his release, Joe is faced with a dilemma.  On the one hand, he wants to go straight.  On the other, crime is the only life he’s known.

At the time, Boston’s underworld was overseen by two large rival gangs – an Irish gang, headed by Albert White (a menacing Robert Glenister), and an Italian gang, headed by Maso Pescatore (a serious but approachable Remo Girone).  Even though Joe is Irish, he despises White, so he goes to work for Pescatore.  These early Boston scenes are fairly standard stuff for mob films – filled with shootouts, blackmail, and double-crosses.  It’s not hard to follow, but there’s nothing particularly special about it.

But Pescatore determines he needs Joe to spearhead his Tampa operation, as he’s losing business there to White’s gang.  Upon Joe’s arrival in Tampa, the excitement level increases exponentially – with unique characters, and a seedy underbelly of Cubans, American Hispanics, and the Ku Klux Klan.  Along with his friend and confidant Dion (Chris Messina), Joe builds his empire in classic fashion.  He eliminates his competition.  He marries a Cuban expatriate names Graciela (Zoe Saldana), who uses Joe’s expertise to amass weapons to fight for the Batista revolution (the regime which preceded that of Fidel Castro).  And Joe acquires the help of police chief Irving Figgis (Chris Cooper) to bring a casino to town.  Figgis sees employment opportunities.  Joe sees dollar signs.

Joe’s life is great.  So great that we expect it to come crashing down, a la Martin Scorsese’s classics GoodFellas and Casino.  But the ironic twist here is that the thorn in Joe’s side comes not from the authorities or a so-called “mole” or fink, but from Chief Figgis’ recovering drug-addict daughter Loretta (Elle Fanning), who has turned her life over to God, and publicly preaches against the sins of alcohol and gambling addiction.  It’s an interesting angle for a picture about thugs.

Some of these Tampa characters are what gives Live by Night a much-needed breath of fresh air.  Messina’s Dion is smart and witty, and has many of the film’s best lines.  Elle Fanning is superb, particularly in comparison to her role in the forthcoming 20th Century Women.  And Chris Cooper again solidifies his status as one of the greatest character actors of this millennium.  His Chief Figgis character is straight-laced but fair.  And the anguish he shows upon his daughter’s descent into drug culture is heartbreaking.

But my favorite supporting performance belongs to Matthew Maher as R.D. Pruitt.  His is one of those characters who may be serious and may be pulling your leg – the kind of character Joe Pesci used to regularly play.

In sharp contrast, Affleck’s Joe Coughlin is the least interesting character in the entire picture.  Affleck exerts so little emotion, I felt like this was simply a continuation of his autistic character in last fall’s The Accountant.  Contrast Joe Coughlin to Tony Mendez, the CIA agent responsible for freeing a group of U.S. diplomats from Iran in Argo.  Affleck’s Mendez was an intelligent and charismatic character.  Alas, the whole film revolved around him, and Affleck played the part to the hilt.

Here, it feels like he’s downright uninterested.  Maybe he’s eagerly anticipating his next turn as Batman.  If so, it shows.  Affleck’s Joe reminds me of Ryan O’Neal’s title character in Stanley Kubrick’s Barry Lyndon, in that all the action of the film happens to him, but he rarely initiates any action on his own.

As a director, Affleck has mastered a complex story, but without the sense of urgency common to the great gangster flicks – such as the aforementioned Scorsese pictures, plus The Godfather and American Hustle.  Live by Night feels pedestrian by contrast, as the plot moves from scene to scene, and location to location, without any real involvement of the viewer.  I’m sure this material seemed fascinating on paper, but it doesn’t translate well to the big screen.  We simply feel like we’re reading a book about the mob which is being acted out on screen.  Nothing more, nothing less.

And that’s too bad.  Affleck’s 2012 effort Argo won Best Picture that year, and I had it second on my list of the year’s best films (next to Paul Thomas Anderson’s The Master).  Live by Night seems pedestrian next to the thrill ride that was Argo.  There’s nothing particularly wrong with it, but there’s nothing exceptional about it either.