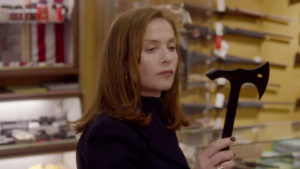 American audiences are most familiar with Dutch director Paul Verhoeven from his 25-30 year old thrillers RoboCop, Total Recall, and the sexy Basic Instinct, which briefly made Sharon Stone a household name.  With his first notable work in years, Verhoeven has churned out his initial French-language film, Elle.  Starring the great Isabelle Huppert as a no-nonsense businesswoman, Elle covers some of the same psycho-sexual territory as Basic Instinct, although I liked this one a lot better.

Michele Leblanc is co-owner of a video game producer who meets all the requirements of a successful businessman.  She lives alone in an upscale apartment.  Her younger male co-workers are jealous of her success and a bit spiteful of her take-no-prisoners management style.  She’s not estranged from her son Vincent, but their relationship is headed in that direction.  She has an antagonistic relationship with her mother, who seems to prefer younger, good-looking men.  And she herself is having several “meaningless” affairs.  (And yes, I realize there’s no such thing as a meaningless affair, but she’s in these flings for the sex only.)  She is every stereotype of the workaholic man; you can check off every square on the list for Michele Leblanc.

To top off all that, her father committed a series of bloody murders in 1976, for which he is serving life in prison.  Due to a photo taken by a media photographer during the night of the murder spree, ten-year-old Michele was incorrectly branded a co-conspirator in this killing binge.  She has resented authority (particularly the police) since then.

Within the first minute of Elle, Michele is being raped by a man in a ski mask.  Now what’s the first thing any of us would do in this situation?  Call the police, right?  Even if we may begrudge their handling of a 40-year-old episode?  Yes!  Michele does not.  Instead, she becomes suspicious of all the men in her life.  As the proverbial walls of her life seem to close in on Michele, Huppert’s haunted sense of anxiety increases – as she again proves why she is one of the greatest living actresses in the world.  In the hands of another actress, Michele might have seemed either too dark and depressed, or too buoyant and forgiving.  Verhoeven requires Huppert to walk a fine line, and she delivers in spades.

When the rapist returns for a second go-‘round, Michele learns his identity.  But instead of turning him in at once, she attempts to have consensual sex with him.  Unable to perform from a position lower than total dominance, the rapist reverts to his old ways.  The climactic scene (no pun intended) is at once powerful and bizarre.  Diehard feminists might dislike Elle, and consider Verhoeven a chauvinist.  As a male, I find myself playing many of the scenes over and over in my mind, trying to make sense of the gender-bending Michele holding her own against the act most likely to destroy the psyche of 99% of its victims – that which often results in years of therapy, due to its violation of the female body and mind.

Elle is not necessarily an easy film to watch, although Verhoeven treats the sex (and particularly rape) sequences with a light enough touch as to allow us to use our own minds to fill in the axiomatic blanks.  There’s no need to depict the rapist as a monster – his actions already prove that he is.  Verhoeven’s light touch with this sensitive material is reminiscent of the way Kenneth Lonergan used classical music and sunny weather to lighten the load of the very depressing plot of the recent Manchester by the Sea.  In fact, this may be Verhoeven’s best work yet.  And just when I thought his career was long finished.

Isabelle Huppert is nothing short of amazing.  It is rare for actors in foreign-language roles to be nominated for Oscars.  Huppert deserves it this year.

The rest of the acting ensemble is fine, but I’d like to draw particular attention to Alice Isaaz as Josie, Vincent’s obnoxious and overbearing girlfriend, who happens to despise Michele.  Isaaz turns what could have been a role played strictly for laughs into a mildly sympathetic character by film’s end – if for no other reason than as her character softens (albeit mildly), we realize Josie’s similarities to Michele, and Vincent’s predilection to domineering women.

Much credit for Huppert’s and Isaaz’s success must be given to screenwriter David Birke, who adapted the screenplay from Philippe Djian’s 2012 novel “Oh…”

I can’t say Elle is my favorite picture of 2016, but it could find itself the winner of this year’s Foreign Language Oscar.  And from what I’ve seen this year, such an award would be well-deserved.