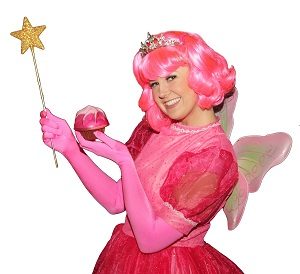 The Pyramid Players are tickled pink to announce Pinkalicious, the Musical will return to Beef & Boards Dinner Theatre during its 2017 Season. This fun show opens Feb. 17 for kids of all ages.

Pinkalicious loves pink and wants everything in her life to be pink. Her dream is to radiate pink. After over indulging in pink cupcakes, she wakes up pink. She is thrilled to be pink and have her dream come true. Her parents take her to the doctor, and she is diagnosed with pinkititis. On the way home, Pinkalicious plays at the playground but is attacked by birds and bees when she is mistaken for a pink flower. Her best friend doesn’t even recognize her as she is camouflaged in the garden. At home, she eats another cupcake, and the next morning she wakes up red and develops pink eye pinkititis whereby she can only see the color pink. Now she must do something to fix her predicament.

She bravely follows the doctor’s order to eat green food. Due to her new resolve, Pinkalicious is transformed back to normal. Pinkalicious has learned self-control and to be careful for what you wish for. Her brother, on the other hand, has eaten the last cupcake, turns pink, and shouts with glee: Pink-A-Boo!

Pinkalicious stars Jaddy Ciucci in the title role, with Danny Kingston as her brother, Peter. Logan Moore plays her father, Mr. Pinkerton, her father. Teneh B.C. Karimu is her pediatrician, Dr. Wink, and Sally Scharbrough is her friend Alison.

Pinkalicious, the Musical opens the 2017 Live Theatre for Kids series at Beef & Boards, and is on stage through March 18. Pyramid Players productions are one hour in length and presented without intermission. Performances are for all ages, but offered particularly for children in preschool through sixth grade. Children have the opportunity to meet the cast after each show for pictures and autographs.