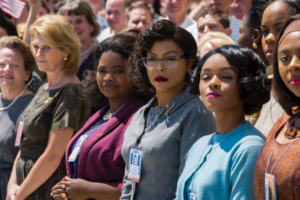 As a department of the U.S. Government, NASA was one of the first “businesses” to integrate African-Americans into its workforce.  Even before the height of the Civil Rights Movement, African-American mathematicians were employed by NASA before and during the Mercury 7 program – when the space race was in its infancy.  These mathematicians are subject of Theodore Melfi’s film Hidden Figures.

Although the United States was the first (and so far only) country to put a man on the moon, it was the Soviet Union which was responsible for the first satellite and the first man in space, Yuri Gagarin.  Under pressure to at least keep pace with the Soviet program, Space Task Group director Al Harrison (a surprisingly uptight Kevin Costner) searches the NASA database for a mathematician capable of quickly handling the difficult calculations required to insure flight safety and accuracy.  As a last resort, he checks with the group of black females, operating in the basement of a building located about a half-mile away from the main NASA office.  There, he finds Katherine Johnson (a terrific Taraji P. Henson), a child math prodigy and physicist, able to perform complex computations correctly and (perhaps more importantly) expeditiously.

Hidden Figures also follows the careers of two other African-American mathematics pioneers at NASA – Katherine’s friends Dorothy Vaughan (Octavia Spencer) and Mary Jackson (singer Janelle Monae).  While we all cheer each advancement these women earn, the brilliance of the screenplay (by Melfi and Allison Schroeder) is in the small moments – the nuts and bolts of female African-American advancement in the early 1960s.

For example, Katherine remains low-key, as she tries to blend in with the white men in the Space Task Group.  But it’s difficult for her to take a quick bathroom break when the nearest colored ladies room is a half-mile away in the basement of her old building.  Likewise, when a brand-new IBM computer is installed at NASA, Dorothy wants to become the first employee capable of operating the machine.  But learning the Fortran language is no easy task (even for a math genius) when the library’s Fortran book is in the “white only” section.  And Mary needs to take a night class to learn the fine details of the program to which she is assigned.  But the local high school that offers the class doesn’t allow black students.

As far as the white male leadership is concerned, these men are not necessarily racist; but rather, they simply never considered the obstacles which stand in the way of their new African-American co-workers.  When Task Group director Harrison learns of Katherine’s bathroom issue, he grabs a hammer and personally removes the “Colored Ladies” sign from their bathroom – thereby opening up all the NASA ladies rooms to both races.  Hidden Figures isn’t so much a film exposing blatant racism as it is a film exposing the lack of knowledge most white people had about African-Americans.

Yes, blacks sat in the back of the city bus.  But why?  Because that’s how it’s always been?  How might this negatively affect them?  These are questions whites had never had to consider before.  But Harrison is more concerned about successfully putting a man in space than the skin color (or sex) of the smartest computational brain on staff.  We all know the Civil Rights Movement brought change during the 1960s.  But Hidden Figures takes us through the mundane, everyday changes that had to occur to assimilate African-Americans into the workplace.

The performances are all top-notch.  While Monae overplays her “sass” a little, Spencer excels as the born leader, and Henson deserves a Best Actress nomination for playing the shy, studious character with just enough of an independent streak to keep things interesting.  Costner is at his best in many years.  As he ages, I hope he sticks to supporting roles like this – which really allow him to show his acting chops without having to carry the entire film.

As far as the direction, not only is Hidden Figures a fascinating look at one of the first integrated workplaces, but Melfi gets the time and place setting exactly right.  We often marvel at the way filmmakers capture a time and a place on film, but Hidden Figures hits the nail on the head in its portrayal of Hampton, Virginia in 1961.  The cars, the clothes, the music – everything is spot-on.  In lesser hands, I might have felt as though I were watching 1961 Virginia.  In Melfi’s hands, I felt as though I were living 1961 Virginia.  Hidden Figures had better be nominated for Best Production Design, Makeup & Hairstyling, and Costume Design.

Hidden Figures has easily jumped to the top realm of this year’s best pictures, and its late release insures a strong Oscar run.  Best Picture Oscar?  Don’t be surprised!