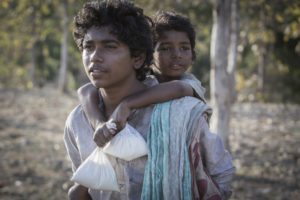 In his directorial debut Lion, Garth Davis tells the true story of Saroo Brierley, an Indian boy tragically separated from his mother and brother at a young age, and adopted by an Australian couple.  As a young man, Saroo sets out on a journey to locate his original family.  If this sounds like a good, heartwarming story for Christmas audiences, you would be correct.  It’s hard not to be emotionally moved by Lion; unfortunately, this film is exactly what you’d expect.  Don’t anticipate any surprises; there aren’t any.

Opening sequence is most interesting

The most interesting segment of Lion is the early set-up portion.  We’re introduced to Saroo and Guddu, the older brother he idolizes.  The boys live with their mother in a small, poverty-stricken village in the middle of India in the mid-1980s.  At a mix-up in a train station, Saroo accidentally hops a cargo train to Calcutta, over 1600 kilometers away.  Unable to speak the Bengali language used in Calcutta, Saroo is hopelessly lost and unable to communicate with almost everyone.  The Calcutta sequence is fascinating, as we learn (with hardly any dialogue) that Saroo is smart, resourceful, and clever.  He finds ways to stay fed and escape danger.

Eventually befriended by an adoption agency employee, Saroo finds himself the newest family member of a childless Australian couple, John and Sue Brierley, played by David Wenham and (in her best work in years) Nicole Kidman.  About a year later, the Brierleys adopt another young Indian boy, and then we fast-forward to Saroo’s young adult years, in which he undertakes the mammoth task of locating his Indian family.

While the early story is entertaining and enlightening, I would have liked more substance in Saroo’s Australian years.  Sunny Pawar is great as young Saroo, and Dev Patel (from Slumdog Millionaire) is more than adequate as adult Saroo.  But I see no reason not to employ the talents of an Indian teenage actor to represent Saroo’s youth – much as three different actors played Chiron in Barry Jenkins’ recent Moonlight.  Consequently, when Patel and Kidman share emotional moments toward the end of Lion, we don’t feel the necessary mother-son connection bonding these two interesting characters.

Lest you think such an addition would lengthen Lion to an uncomfortably long film, much of the final act could be trimmed.  During this chapter, we see Saroo investigating his birth family via Google Earth – which is probably not his best choice, what with all the investigative tools available in this day and age.  Granted, Saroo was so young he didn’t even know his last name or his mother’s first name.  But there simply must be a better way to locate people than by the sheer happenstance of Google Earth.

This segment of Lion also contains a lot of emotional and self-reflective, yet essentially empty, discussion between Saroo and his girlfriend Lucy – a wasted role for Rooney Mara, one of our best young actresses.  Saroo ponders the futility of his task, as well as his drive to continue it.  Lucy provides comfort and understanding.  But this is a fundamentally uninteresting pursuit, in which Saroo employs the assistance of absolutely no one.

Given the spellbinding establishment of the plot in the early India sequence, I hoped for a bigger payoff.  Don’t get me wrong – the ending is sentimental and satisfying.  But it could have been so much more.

Lion is based on Luke Davies’ non-fiction book “A Long Way Home.”  As Davies also wrote the screenplay, it only stands to reason that he didn’t want to stray too far from the source material.  If Davis had utilized the talents of an independent screenwriter, he might have had a screenplay more satisfying to motion picture audiences.  While I’m sure the book makes for an interesting read, there are times when liberties must be taken during a big screen adaptation.  Lion is one of those stories which could have benefited from a more active and dramatic third act – as well as a more fleshed-out middle.

Lion is not a bad film, by any stretch.  It’s an appropriate “feel good” Christmas film.  But if you’re looking for such a treat, wait a couple weeks for the superior Hidden Figures – a feel good film with a riveting story and some of the best acting of the year.