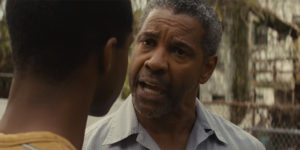 The most difficult aspect of bringing a non-musical theatrical production to the big screen is keeping the picture from looking like a filmed play.  In that sense, Denzel Washington’s adaptation of August Wilson’s 1987 classic Fences fails.  But considering the source material (and the brilliant acting talents of both Washington and Viola Davis), Fences is a smashing success.

Directing himself, Washington plays Troy Maxson, a Pittsburgh trash collector and family man whose greatest concern in life is providing for his family.  In his younger years, Troy was a promising baseball star in the Negro Leagues.  But most of his prime years were spent in prison for an accidental murder he committed during a robbery.  Having long since gone “straight,” Troy makes a decent living, but he must watch his every dollar.

Supporting cast is strong too

In a tour-de-force performance, Viola Davis plays Troy’s wife Rose, the family stalwart, who provides a mental and emotional barrier between Troy and others (particularly his younger son Cory, played by newcomer Jovan Adepo) during the times when Troy drinks heavily.  Mykelti Williamson (Bubba from Forest Gump) is Troy’s mentally-challenged brother Gabriel, and Stephen McKinley Henderson is best friend and co-worker Jim Bono.

The interplay between Troy and the other characters is the meat of the script (which is taken directly from the play), but none is more enriching that his relationship with young Cory.  Cory holds down a part-time job, but he’s also a star on his school’s football team.  Perhaps out of jealousy that his son could become a star athlete (whereas Troy was not), Troy discourages Cory from playing football in favor of working to help support the family.  Troy also dampens Cory’s hopes of playing college-level ball.  Troy’s devotion to the idea that a man should make an honest living is admirable, but he seems to go overboard in requiring his son to work above all other pursuits.  Their father-son discussions are sometimes quite affecting; other times quite agonizing.  The outcome of their discourses is often dependent on the amount of alcohol in Troy’s body at the time.

Wilson’s play is an aggressive expression of family dynamics perhaps not uncommon to many of us – particularly those required to work hard for little pay.  Fences is not necessarily a story of racial tension – All the characters are African-American – but its realities apply as much, if not more, to lower middle-class urban dwellers than to other Americans.  This is a story of people we read about in the newspapers but really don’t know.  Fences is as eye-opening as any other picture I’ve seen this year.  And Denzel Washington’s powerful depiction of Troy is feasibly the finest acting of his long, successful career.  Viola Davis has never been better.

But Washington’s direction screams “filmed play” from the very first scene.  It’s a discussion (a long discussion) involving Troy, Rose, and Jim Bono, following another trying workweek.  While this dialogue takes place in the Maxson’s back yard, we never see another person – no neighbors, no dog walkers, no one.  Nor do we hear passing traffic.  Or airplanes.  We may as well be watching these actors on a New York stage.  Save for the occasional scene in the Maxson’s kitchen, all the activity in Fences takes place in this achingly quiet and uneventful back yard.  The wordy script provides all we need to know about these characters.

Contrast this to Barry Jenkins’ recent Moonlight, which features long segments of no dialogue whatsoever.  There are times in Moonlight when more is accomplished via facial expressions than had we been treated to additional speech from the characters.  In fact, Moonlight is also based on a play.  The difference is you’d never know it from watching it.

I wish Washington had thought outside the box when adapting Fences to the big screen.  Rather than simply film the play, why not replace some of the dialogue with a flashback scene or two?  Why not re-set some of Troy and Jim’s conversation in the city trash depot?  Why not a short scene of Cory’s football practice?

While I liked Fences, I wish it had been more adventurous.  After all, the mediums of film and theatre are very different.  The end result here is two hours of superb acting, which made me wish I were watching Denzel Washington and Viola Davis performing this material on a stage somewhere.