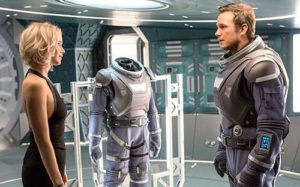 The premise of Morten Tyldum’s new science fiction film Passengers sounds fascinating.  On a 120-year voyage to a distant planet, one of over 5000 passengers mysteriously awakens 90 years too soon.  What will he do?  Will he be able to put himself back into hibernation?  Will the others awaken as well?  Is the excursion now doomed?  Unfortunately, what could have been an intriguing story devolves into a typical mainstream sci-fi thriller, complete with explosions and rapidly malfunctioning equipment.

Chris Pratt plays Jim Preston, a mechanical engineer who wakes up and can’t go back into hibernation mode.  He first experiences denial, then anger, then hopefulness, as he tries to logically figure a way out of his situation, a la Matt Damon’s character in last year’s The Martian.  Eventually realizing his fate, Jim contemplates waking a fellow passenger, and his brief investigation has led him to one Aurora Lane, a beautiful journalist and writer with a winning smile and bubbly personality.  Now why he didn’t think to wake a commander, pilot, or fellow engineer is beyond me.  But after a year of living in solitude in a huge spaceship, I guess he feels more physically and emotionally lonely than eager to correct a grave malfunction.

As we might expect, Jim and Aurora fall in love (after Aurora also faces the stages of denial, anger, hopefulness, and then acceptance).  With access to seemingly endless food and beverages (as well as a startlingly expansive wardrobe for Aurora), the two have the time of their lives.  They can dine in a fancy restaurant complete with robot servers, or share drinks at a classy bar while receiving typical bartender advice from a British-accented droid barkeep.  Save for contact with any other humans, their life together seems impeccable.

It was at this point I wondered where a smart screenplay might take us.  Will Jim and Aurora eventually become bored?  Will they require additional companionship?  Will they awaken the others?  And if so, will anyone be able to correct the apparent malfunction that awakened Jim in the first place?  Or will Jim and Aurora be content to simply live out the rest of their days together alone in outer space?  Will their conversations become deeper, as they begin to contemplate their fate philosophically?

Could have been interesting love story

There are many intriguing directions Passengers could have taken.  But instead, screenwriter Jon Spaihts sees fit to awaken one more passenger – a sickly crew chief named Gus, played by the always reliable Lawrence Fishburne.  Gus quickly assesses the gravity of the predicament of the three passengers, and formulates a plan to make repairs to the craft before the other passengers awaken – which would thereby ruin the expensive mission.  As the dialogue becomes more fateful (e.g. “What are we gonna do now?”), we can sense where this is going – and it ain’t good.

Passengers deteriorates into standard science fiction fare – whereby common men and women are thrust into impossibly dangerous circumstances, only to emerge as heroic.  Whatever disagreements our protagonists may have had will now disappear as they save each other’s lives, silhouetted against a ball of flame depicting just how closely they escape death.

And that’s a damn shame.  If Passengers had been billed as standard sci-fi fare, I could have accepted the drawn-out third act letdown.  But the build-up had me eager for something greater.  Something more like 2013’s Gravity, or last year’s The Martian.  Why not write an intelligent script that challenges its viewers?  Why not think existentially instead of a slow decline into yet another outer-space action flick?  The utter averageness of Passengers is magnified by its great promise.

I must interject here and say that, once again, Jennifer Lawrence continues to establish herself as one of the greatest actresses of this decade.  No, her work here doesn’t compare to last year’s Joy, or her masterful supporting performance in 2013’s American Hustle, but she brings a youthful charm and sense of wonderment to Passengers that makes it at least palatable.

Still, of all the big Oscar contending films released this winter, Passengers ranks as one of the worst.