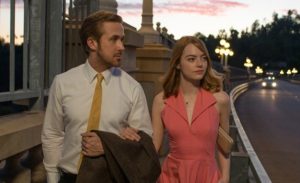 I’ve heard the Oscar buzz about Damien Chazelle’s La La Land.  And my first reaction was, “A musical?  Really?”  Yes, Chicago did win Best Picture for 2002, and deservedly so; and Les Miserables was better than expected.  But this one is an original – in other words, it’s not an adaptation of a popular Broadway production.  Could it really be as great as they say?  Come to find out, the original screenplay (also by Chazelle) works to its advantage.  Since we have no other source material to compare it to, La La Land transports us to another time and place – when life was sunny and things had a way of working out for the best.

Of course, such a setting never did exist – save for the magical world of big-screen musicals.  Remember being transported to another dimension by Singin’ in the Rain, West Side Story, and Mary Poppins?  That dreamlike sense of imagination returns in La La Land, thanks to Chazelle and the brilliant cinematographer Linus Sandgren (of American Hustle fame).  But don’t for a minute think this is some overly-sweet old-fashioned musical of the sort Carol Burnett used to mock on her “Late Late Late Show” routine.  The story is reasonable and the plot is down-to-earth.

Characters are typical of Los Angeles

Ryan Gosling stars as Sebastian, a jazz pianist who dreams of opening his own jazz nightclub.  Emma Stone is Mia, an aspiring actress, quickly growing tired of the audition scene.  Sebastian takes low-paying piano jobs, and Mia works as a barista in a coffee shop on the Warner Brothers Studio lot.  Their stories are as typical in Los Angeles as those of coal miners in West Virginia.  The two meet cute, and have a relationship full of song, dance, and mutual support for one another.

While this set-up certainly sounds typical of the musicals of yore, La La Land has a decidedly modern feel to it.  For instance, Mia is dating another man – and his character doesn’t send up any “red flags,” as we might expect.  Plus Sebastian has an argument with his sister (Rosemarie DeWitt), regarding his inability to pay his bills.  And even the music has a modern feel.  Singer John Legend plays a bandleader of a contemporary band.  Plus there’s a scene featuring a 1980s cover band.

The casting of Gosling and Stone works well.  Neither is known as a musician.  Neither has sung or played on Broadway.  But Stone has a good voice, and Gosling’s playing is out of this world.  Furthermore, they have that certain “click” that all great Hollywood couples possess – Astaire and Rogers, Bogart and Hepburn, and now Gosling and Stone.  The screen sparkles when they share it.  I’d like to see the two of them in a romantic comedy.  Or even another musical.

While I can certainly see Emma Stone receiving a Best Actress nomination for her work, the real star here is director Damien Chazelle.  This is the same man who made Whiplash a couple years ago.  As in that earlier film, his camera loves jazz.  The fast editing cuts during the instrumental numbers make the horns seem to crackle and jump right off the screen.  Chazelle is obviously an aficionado of music, and it shows.

And under his direction, Los Angeles has never looked better. The weather is always sunny, and the colors are as brilliant as in a Pedro Almodovar film.  Griffith Observatory radiates in the night sky, and Santa Monica Pier is clean and romantic.  Save for one rude gesture in the opening number, everyone is pleasant and happy.  And while most Hollywood pictures of the “aspiring Hollywood star” nature feature a Los Angeles that eats up its wannabes and spits them back out again, La La Land actually embraces the whole mechanism by which stars are made.    Even when Mia grouses over another failed audition, we just know she’ll eventually win that career-making role.

But there are two aspects of La La Land that take it from a “nice” film to an award contender.  First, it would indeed work perfectly well had it not been a musical.  In other words, if Gosling and Stone never broke into song, Chazelle would still have a great story.  In most Broadway adaptations (like Chicago), the musical numbers are used to advance the plot.  Here, the musical numbers exist merely as an extra bonus, if you will.  They are the icing on the cake to an already enjoyable picture.  And unlike film versions of Broadway musicals, there really isn’t much music.  Stone and Gosling sing only a handful of songs, and there are only two production numbers.  Much of the music is instrumental jazz.  Remember how 2011’s The Artist would have worked perfectly well had it not been a silent film.  Same idea here.

But I think what impressed me the most is that Chazelle has the chutzpah to give La La Land an unexpectedly downbeat ending.  It’s not sad, per se, but it’s a lot heavier than we expect.  I won’t spoil it, but suffice to say you may not see it coming.  But even if you cry, you’ll probably want to see this one multiple times.

Damien Chazelle has created another modern-day masterpiece (following 2014’s Whiplash), and he’s done so by updating the classic musical without making fun of it.  I loved La La Land.  It’s one of the best, and certainly one of the most unique, pictures of the year.