Manchester by the Sea

In 2000, screenwriter Kenneth Lonergan directed his first feature film.  You Can Count on Me was the story of a single mother (Laura Linney) raising a teenage son, when her drifter brother (Mark Ruffalo, in his first major role) comes back into her life to complicate things.  I loved You Can Count on Me.  It was my favorite picture of the year! 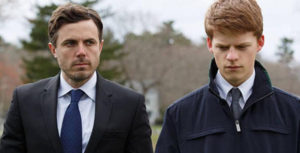 Now fifteen years later (and following 2011’s ill-fated Margaret), Lonergan has finally released another hit motion picture.  Manchester by the Sea follows a good-hearted hothead (Casey Affleck, this time), hand-picked to raise his teenage nephew following the sudden death of his brother.  Sound familiar?  It is a similar set-up, and Lonergan’s directing style is comparable, but Manchester by the Sea is Affleck’s story, whereas the good-for-not-much man was a supporting character in the previous work.

The basic premise of Manchester by the Sea is that Joe Chandler (Kyle Chandler), a divorced father raising a son (Lucas Hedges) dies of a heart attack.  In his will, he expects his janitor brother Lee (Affleck) to move up from Boston to the small fishing village of Manchester-by-the-Sea to finish raising young Patrick.  Lee refuses, but decides to move up temporarily, until more satisfying arrangements can be made.  During their time together, uncle and nephew bond.  But don’t for a moment think this is a typical fish-out-of-water guardian story.  Lonergan’s screenplay takes this material in a wildly different direction from we expect.

The logical questions posed during the film’s first act are:  Why can’t Patrick’s mother raise him?  Turns out she’s a drunk who ran out on her family some years earlier.  And why Lee?  This is a grown man who still picks bar fights, can’t keep a job, and has no foreseeable future.  This is where things get murky.  I don’t know why Joe would have chosen his brother, other than Patrick was always close to his uncle, and always looked up to him as the playful ne’er-do-well counter to his responsible father.

Character is not well-liked in town

Everywhere Lee goes in Manchester, people talk about him behind his back – as though they know something about him that we don’t.  About halfway through the film, we learn through a flashback that Lee’s backstory is even more horrific than we anticipated.  Knowing this information helps explain Lee’s personal distance from reality, and his inability to form meaningful relationships.

Meanwhile, Patrick’s life appears to be on cruise control.  He’s in a rock band, has two girlfriends (oblivious to one another), makes decent grades, and takes care of his father’s boat during the summers.  All Patrick seems to need is a chauffeur until he earns his driver’s license.  Enter Lee.  The relationship between the two is the meat of this film, and it’s one of the most intriguing portraits of a caretaker-son alliance I’ve ever seen.  The trailers indicate Manchester by the Sea features Casey Affleck and Michelle Williams, but her role as Lee’s ex-wife is quite small.

Affleck shines in best performance yet

Unfortunately, Lee has difficulty connecting with Patrick and his large circle of friends, coaches, and teachers.  It’s hard for him to rise above the level of mere custodian of Patrick – which ironically correlates to his job as a handyman-custodian in Boston.  With this role, Casey Affleck cements his status as an acting force – not merely the younger brother of Ben Affleck.  And Hedges honest portrayal of a teen ranks as the best of the year.  Yes, Hailee Steinfeld was great in The Edge of Seventeen, but her role was comedic; Hedges’ is dramatic.

And kudos to Kenneth Lonergan – not only for his original screenplay, but for his adept direction.  In lesser hands, this material could have been maudlin.  But Lonergan tempers the harsh realities of the story with a light touch, often making us laugh out loud.  In fact, there are a couple scenes we don’t even realize are funny until they are over.  Unlike a Neil Simon script, for example, Manchester by the Sea isn’t so much filled with humorous dialogue as it is amusing situations.

Music director Lesley Barber keeps our emotions in check with a light, bouncy score of chamber music, which would have reminded me of New England even without the beautiful scenes of the countryside.  I particularly liked the scene of Joe’s funeral.  Lonergan couldn’t very well leave it out, but he realized letting us hear a litany of condolences might have been as sappy as a Bobby Goldsboro song.  So instead, we see Lee, Patrick, and other family members receive commiseration from their visitors, while we hear a beautiful operatic aria.  It’s a magnificent scene, and a lovely piece of filmmaking.

I can’t recommend Manchester by the Sea enough, but I will temper my enthusiasm with two caveats.  First, perhaps because it didn’t strike me as original as his directorial debut, I did not like it as well as You Can Count on Me.  That film featured an award-winning performance from Laura Linney as the solid rock in the life of her teenage son.  I felt like I might have been even more mesmerized with Manchester by the Sea had it contained such a character.

And second, I felt Lonergan relied a little too heavily on flashbacks.  During the initial set-up of the situation, they are necessary.  They provide needed context regarding the characters and their family members.  But once the story gets going, he should have dropped the flashback scenes.

Still, I do believe Manchester by the Sea is another of the best pictures in what’s turning out to be a great Oscar season.  I hate to sound like a broken record, but don’t miss this one!