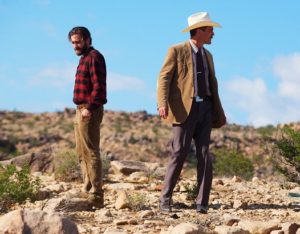 With two Oscar-contending late-year releases, I have a gut feeling the MPAA intends to finally award Amy Adams with the Best Actress Oscar at February’s ceremony.  Why? Because by my count, she should have at least two Oscars already; instead she has none.  The academy has overlooked her for too long.

Unfortunately, I was underwhelmed by Denis Villeneuve’s sci-fi flick Arrival, although Adams was admittedly the best thing about it.  No such apprehension this time though.  Tom Ford’s Nocturnal Animals is a tight, riveting neo-noir thriller in which Adams again cements her position as the greatest actress of my generation.  Her performance instantly catapults her to the top of the list to take home the coveted statuette.  What makes Adams’ performance so wonderful?  We’ll get to that.

Nocturnal Animals, based on Austin Wright’s 1993 novel “Tony and Susan,” revolves around highly-successful avant-garde artist Susan Morrow (Adams), the lonely wife of a successful businessman who lives in a huge, artistic, but cold mansion, staffed by seemingly a dozen servants.  One day Susan receives the manuscript to a novel written by her ex-husband Edward (Jake Gyllenhaal, in his best performance since Brokeback Mountain 11 years ago).  The manuscript is the fictional story of a man named Tony (also Gyllenhaal), who is attacked one dark night in the middle of the desert, as he and his family are driving to their vacation destination.

The three attackers run Tony’s car off the road.  Two of them drive away in Tony’s car with his wife (Isla Fisher) and daughter.  The third forces Tony to drive his car to a desolate West Texas country road, where he is abandoned.  Eventually we learn that Tony’s wife and daughter have been raped and murdered.  We are to believe that Tony and his wife represent Edward and Susan, although the incident described did not actually happen to them.

The screenplay not only moves back and forth between the manuscript narrative and present-day Susan and her fascination with Edward’s novel, but also with a third storyline showing us Edward and Susan’s courtship of twenty years earlier.  Now I typically dislike this structure.  I’d prefer to see one segment, then another, then another – not necessarily in chronological order, mind you, but without all the jumping back and forth.  Having said that, I cannot imagine any other way Nocturnal Animals could have been told.  In this case, I didn’t mind the story-jumping, but I do think the attack scene would have been more compelling had it played straight through, a la Quentin Tarantino.

Amy Adams knocks it out of the park again

Now back to Adams.  Due to the structure of Tom Ford’s screenplay, I expected to see titles indicating the place and year of the scenes we were about to witness.  But Ford omits them.  So how is it I immediately knew whether I was watching present-day Susan, Edward’s manuscript, or their 1990s dalliance?  Easy.  I watched Amy Adams.  Through her facial expressions, her tone of voice, and her demeanor, we are instantly able to place each new scene.  Granted, some of this is due to her different hairstyles.  But her brilliance as an actress essentially does Ford’s job for him.

Gyllenhaal’s Edward and Tony, by contrast, are much closer to one another, as Edward intentionally inserted himself into his composition.  Still, we have no difficulty determining which narrative we are watching.  Thanks to Ford’s direction (and Seamus McGarvey’s cinematography), the West Texas scenes (even the interiors) have a yellowish brown hue to match the desert.  Even the clothes are brown and weathered.  The present-day scenes (again, even the interiors) are an icy blue – likely to match Adams’ striking blue eyes.  And the courtship scenes take place in the bright twinkling lights of New York.

The supporting roles are filled with blue-chip acting as well.  Michael Shannon’s chainsmoking no-nonsense sheriff detective Bobby Andes is so memorable it could certainly earn him his first Oscar as well.  Aaron Taylor-Johnson plays the formidable leader of the troublemakers in a performance that could see him earn a nomination.  He’s not as chilling is Javier Bardem in No Country for Old Men”  Nor is he as horrifying as Dennis Hopper in Blue Velvet”  But he ranks right up there with some of the most intimidating bad guys to come along in quite a few years.  Laura Linney is also great as Susan’s authoritarian mother who advises her not to marry Edward.

Nocturnal Animals unfolds deliberately yet without ever becoming staid.  These are two hours in which you’ll never look at your watch.  And as with many great films, the ending is phenomenal.  The credits actually begin to role before we completely figure it out.  This is a picture which will invite post-viewing discussion.  To the frustration of some audience members, not every strand is tied up in a neat little bow.  In my opinion, not only is there nothing wrong with that, but as a thinking adult, I’m not sure I need screenwriters to guide me by the proverbial hand with each detail.  I can probably figure it out on my own.  And if your opinion differs from mine, then all the more reason to invite post-viewing analysis.

I loved Nocturnal Animals.  It ranks with Hell or High Water and American Honey as one of this year’s best.  And I fully expect it to clean up some Oscars come February.