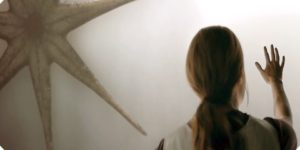 Any review of Denis Villeneuve’s new science fiction picture Arrival must begin with this statement:  Amy Adams is my favorite actress so far this decade.  I consider her to be the Meryl Streep of my generation, in that she can literally play any role very convincingly.  In my opinion, she should have won a Best Supporting Actress Oscar for Paul Thomas Anderson’s 2012 crowning achievement, The Master.  She wasn’t even nominated.  A year later, I thought she was a shoo-in for Best Actress for her provocative turn in David O. Russell’s instant classic, American Hustle.  She lost.  And she wasn’t even nominated for 2014’s Big Eyes – my favorite Tim Burton film ever.

This year, Adams stars in two Christmas releases, and I’m guessing the MPAA will probably consider this to be “her year,” the way last year was “the year” for Julianne Moore.  Moore had been nominated so many times, it was hard not to award her work in Still Alice.  If Adams wins, I’ll obviously by elated, but I’ve never liked the idea of a “consolation prize” Oscar – a phenomenon which occurs after a great actor or actress has been overlooked so long the Academy feels like they “owe” him one.  An example would be Jack Lemmon in Save the Tiger, a mediocre film nobody saw, but he should have won a couple times prior, so the award was given to him.

After seeing Villeneuve’s new sci-fi film Arrival, I’m wary of a “consolation prize” Oscar for Adams.  As usual, she is great.  But I simply cannot recommend this one.

At the outset, twelve huge oblong orbs mysteriously appear at various locations around the world.  One is located in rural Montana.  Amy Adams plays college professor and linguistics expert Louise Banks, who is called to the site by Colonel Weber of the U.S. Army (Forest Whitaker), in an attempt to communicate with the extraterrestrial beings.  The first group of Americans to enter the Montana spacecraft includes Col. Weber, Banks, Ian Donnelly (a scientist played by Jeremy Renner), a photographer, and maybe another tech. guy.  Turns out the aliens’ speech consists of a series of grunts, which Banks immediately concludes will be impossible to translate.  But they do have a unique form of written communication – their tentacles spray a black inky substance into the air in round shapes which look like airborne Rorschach tests, each one of which means something different.

Beginning with extremely rudimentary language (names of people, humans vs. birds, etc.), Banks is able to reach the aliens on a very basic level.  Following a period of weeks, Banks and the aliens are able to at least volley a simple conversation back and forth.  These sequences are the most interesting of Arrival – those which depict a talented linguist’s attempts to communicate with a being from another world.  Adams plays Louise as calm but not afraid to confront even Col. Weber when she believes more time is required to further her task.

Meanwhile, the Chinese government (and subsequently those of Russia and Sudan) gives up home communicating with the aliens, stops sharing information with the other eleven countries, and becomes hell-bent on attacking the spacecraft.  While this plot development seems logical (stereotypical though it may be), it actually detracts from the more interesting story involving the American team.  I’m guessing screenwriter Eric Heisserer included the Chinese side-story in an effort to persuade Banks to work faster, although I don’t know what more she could have done.

But my real problem with Arrival is a parallel story about Banks’ daughter.  Even before the alien landing, we learn that Banks was briefly married, had a daughter, and then lost her to a rare disease.  As the interesting alien communication story progresses, Banks continues to experience flashbacks and dreams to her daughter’s approximately 12-year life.  At first, these flashbacks accomplish no more than to make us aware the daughter story will play some importance later on.  Then they become an annoyance, further taking our attention away from the linguistic and scientific work at the Montana site.

Third act should have been much better

Eventually, Arrival collapses into an exercise in pseudo-scientific mumbo-jumbo regarding time travel.  The fact that the aliens experience time on a different level than we do is fine, but when their version of time actually affects Banks and Donnelly personally, Heisserer’s screenplay has gone too far.  The ending plays out like a bad “Star Trek” episode.  You know the kind – it sounds mildly plausible until ten minutes after it’s over when we realize it could never happen?  I thought Christopher Nolan’s overwrought, overlong 2014 sci-fi flick Interstellar was bad; Arrival is not a whole lot better.  There’s a lot of talking at the end of this film – almost none of which makes any sense.  And that’s a shame, considering the promise of the set-up, and the fine work of Amy Adams.  But even her presence is not enough to save this one.

There was a much better science fiction film out last spring called Midnight Special.  It too involved aliens, but its screenplay was faithful to the parameters it established during its opening scenes.  Do yourself a favor – skip Arrival and seek out Midnight Special instead.