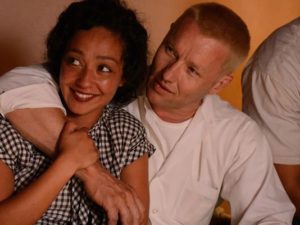 Richard and Mildred Loving fell in love.  They got married.  They had a family.  Their story is the subject of Jeff Nichols new film Loving – which probably sounds “Boring,” until I tell you that this is the couple responsible for the Supreme Court’s unanimous 1967 decision legalizing interracial marriage.  You see Richard Loving was white.  Mildred Loving was black.  They married in 1958.  They lived in rural Virginia.  See the problem here?  As in most Southern states during that time period, interracial marriage was against the law.

Sheriff Deputies raid the Loving household one night shortly after their Washington D.C. wedding, jail them, and make them post bond.  Represented by a local country lawyer, the Lovings are allowed to stay married provided they leave the state of Virginia.  After a period of time staying with some of Mildred’s family in Washington, the Lovings return to Virginia, as they prefer country life to city life.  They are now in violation of the terms of their original county court settlement.  After watching Martin Luther King’s 1963 Washington D.C. march at the National Mall, Mildred writes Attorney General Bobby Kennedy to ask if he can help them stay married and still live in the state of Virginia.  Kennedy refers the case to the ACLU, and the rest is history.

I like the way Nichols’ screenplay focuses on the Lovings themselves rather than the Supreme Court hearings.  Loving is not a courtroom drama; it is a straightforward film about a young couple who simply loved each other.  Loving shows us the daily lives of Richard and Mildred – two relatively unspectacular citizens who live about as we’d expect of rural Virginians in the 1950s.  Richard (a solid Joel Edgerton) builds houses for a living, but also enjoys working on cars in a local garage.  Mildred (a remarkably understated Ruth Negga) is a homemaker and mother to their three young children.  During their time in Washington, Richard works on a construction crew.

Nichols makes two points during these workaday scenes.  First, the Lovings lives were not any different from those of most other Americans at the time.  But more importantly, a hundred years after the Civil War gave African-Americans their freedom, the two races interacted with relative ease in the South.  While blacks and whites worked alongside one another in the factories of the North, we often have an assumption of extreme racial separation in the South.  That false impression is gently attacked in this film.  We see both black men and white men working on Richard’s homebuilding crew – and working on his construction crew during his time in Washington.  A couple of the auto mechanics at Richard’s body shop are black.  And no one ever discusses race.  As with any mechanics, they discuss the car they’re repairing.  Or the weather.  Or the ballgame.  Nobody seemed to openly care about race.  Sure, African-Americans knew they had to use different restrooms; and they knew they weren’t allowed in many retail establishments.  But these restrictions were not the subject of their discussions.  Nobody assumed anything would ever change.  So life went on.

The deeper message, of course, is that interracial marriage in Loving is a stand-in for gay marriage in today’s society.  As we see blacks and whites living in relative harmony in the South 60 years ago, we make the mental leap to modern times, in which gay and straight people live and work in relative harmony.  To wit, if one auto mechanic were gay and the other straight, don’t you think their discussion would revolve around the car, and not around the legality of gay marriage?  While homosexuality and LGBT marriage is never even mentioned in Loving, its presence in today’s world – and its effect on today’s society – is never far from the surface.

That Nichols focuses on the everyday lives of his characters serves to make his point more dramatically than had he concerned himself with the “big picture” of interracial marriage.  Unlike in most films, Nichols’ characters are “doers” rather than “speakers.”  Consider two men working on a car, to stick with this theme.  Most of their time would be spent “doing” (unscrewing a bolt, changing a filter, etc.).  Little of their time would be spent talking.  And that’s what we see here.  In fact, when dialogue does occur, the characters continue their present tasks.  When Mildred comes out to talk to Richard about one of the kids, Richard speaks to her, as he continues unscrewing the bolt he’s working on.  When Richard asks Mildred a question, she continues drying the dishes as she converses.  These characters’ hands are busier than their mouths.  As in real life.  And again, this is the point of Loving.

Acting is outstanding but low-key

Nichols’ actors are perfect for this kind of low-key acting – particularly Ruth Negga.  While Richard cares nothing about publicity, Mildred at least understands the significance of their case.  Negga walks a fine line with this character.  But she says more with her facial expressions that she does with dialogue – again, as we do in real life.  Her love for Richard is more seen than spoken.  She deserves an Oscar nomination for this solid but tender performance.

While we might have imagined a more striking film to tackle the subject of interracial marriage, I believe Nichols’ direction hits just the right notes.  The point is not so much that the Supreme Court tore down a barrier, but that the barrier never existed in the first place – at least in the minds of everyday people.  The greenhorn ACLU attorney (Nick Kroll, in a non-comedic role) cares more about the significance of the case than either Richard, Mildred, or any of their friends or family.

And that’s exactly as it should be.