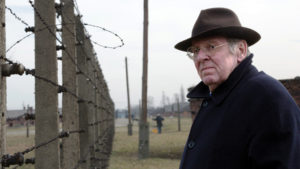 I’ve been hesitant to see Mick Jackson’s Denial, because I suffer from HFO – Holocaust Film Overload.  While I agree the Holocaust is one of the most horrific tragedies in human history, it seems like we have at least one Holocaust picture every year – last year’s Son of Saul, for example.  And none of them exceeds Steven Spielberg’s 1993 masterwork Schindler’s List.  But I was pleasantly surprised this time.  Denial isn’t about the Holocaust, per se.  But the Holocaust serves as the catalyst for an interesting courtroom drama about an anti-Semite, racist blowhard who intentionally distorted the record of Adolf Hitler to present him in an heroic light.  (And no, Jackson could not possibly have foreseen the rise and eventual presidential nomination of Donald Trump back when the film was made a year ago.)

Rachel Weisz plays historian and Emory University Jewish Studies professor Deborah Lipstadt, who was sued for libel in 1996 by British author David Irving (Timothy Spall from Mr. Turner).  Irving claimed she incorrectly labeled him as a Holocaust denier in one of her books.  Unlike in the United States, England places the legal burden of proof in libel cases on the accused.  Therefore, Lipstadt must prove her innocence rather than Irving prove her guilt.  Lipstadt’s first move is her best.  She hires one of the great legal minds in Great Britain at the time, Anthony Julius (Andrew Scott), who also happens to be staunchly opposed to anti-Semitism.  Tom Wilkinson plays her barrister, Richard Rampton, in perhaps the finest performance of his long, distinguished career.

At first, Lipstadt wants to put actual Holocaust survivors on the witness stand, but Julius and Rampton prefer to keep the trial about Irving himself rather than a verdict on whether the Holocaust actually occurred.  Then she’s overruled again when she asks for a jury trial.  Her legal team prefers a single judge, as he would be less likely swayed by Irving’s rhetoric.  Eventually, Lipstadt wonders whether she’ll be able to make any of the decisions.  When the trial begins, Irving (representing himself) comes out of the gate swinging.  He makes several strong legal points early on, and Lipstadt wonders whether she’ll even win her own case.

This sets up a glorious third act for the talents of veteran character actor Tom Wilkinson.  When he methodically and succinctly makes each point, we see Irving squirm with regret that he hadn’t foreseen such legal maneuvering.  Wilkinson’s performance reminds me of Marlon Brando’s fabulous cameo in Euzhan Palcy’s anti-apartheid drama A Dry White Season in 1989, in which his human rights attorney character systematically dismantles his opponent.

Unfortunately, my biggest problem with Denial occurs in these courtroom scenes.  I would love to have seen David Irving portrayed as an intelligent, thoughtful historian rather than devolving into a blathering idiot.  I realize David Irving actually is a racist bigot, and Denial presents itself as a true representation of a particular libel case.  However, I might have preferred an original story in which the accused party’s legal team must attempt to defeat a Holocaust denier without the ease of his discredited character.

In addition, I was underwhelmed by a sequence in which Lipstadt and her legal team travel to Auschwitz to tour the facility to gain any knowledge which might be used against Irving.  Jackson wants us to feel empathy toward the Jews who suffered there, but I simply didn’t feel their pain the way I did in Schindler’s List.

On the whole, Denial is a good film.  Weisz and Wilkinson offer their best performances ever, although the film itself may not be strong enough for Oscar consideration.  The final shot is a classic.  Without giving anything away, Lipstadt stares up at the British halls of justice, presumably to thank the system for protecting her reputation.  In a way, this ending saves Denial by painting the film we’ve just seen as a legal drama rather than a verdict on the Holocaust itself.

There probably is an excellent film to be made about the renouncing of World War II genocide, but Denial isn’t it.  It is, however, the best courtroom drama to come along in quite some time.

Andy Ray’s reviews can also be seen on http://www.currentnightandday.com/