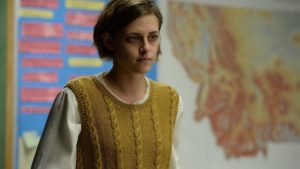 Independent director Kelly Reichardt’s latest offering Certain Women is an art film.  Fans of mainstream cinema (only) will dislike it.  It’s not a warm, fuzzy, emotional movie.  It exists simply to introduce us to three women.  Nothing more, nothing less.  Certain Women is more a deliberately-paced character study than a plot exercise.  In that sense, it reminds me somewhat of Tom McCarthy’s 2003 gem The Station Agent.  Certain Women isn’t nearly that original, but it mines some of the same territory.

The first third of Certain Women follows rural Montana attorney Laura Wells (Laura Dern, in her best role in years) as she assuages her client Fuller (Jared Harris) that he is unable to collect any additional compensation from his employer after he agreed to their nominal settlement almost a year ago, following a workplace injury.  Powerless to appease Fuller, Laura takes him to see a fellow attorney at a different firm.  Laura is shocked that Fuller willingly accepts the male lawyer’s conclusion that he has no further recourse.  Why didn’t he acquiesce when the news came from her?  Is it because she’s a woman?  No answer is offered, but the other two women will face similar concerns.

The middle portion concerns Gina Lewis (Michelle Williams from Blue Valentine), a wife and mother of a teenage girl, who is in the process of building a new family home with her husband Ryan (James LeGros).  Gina fears that she is their daughter’s only parental figure, as Ryan has positioned himself more as her friend than her father.  On the way home from a camping weekend, the family stops by the home of an elderly friend named Albert, played by veteran character actor Rene Auberjonois.  Gina asks Albert if he will grant his permission for the Lewis family to use the scrap sandstone that’s been sitting in his front yard since the old school was demolished years earlier.  This should be a simple conversation, but Albert seems only willing to discuss the sale with Ryan.  Again, does he have some reservation about making a deal with a woman?

Then Lily Gladstone plays a ranch hand named Jamie, tasked with taking care of a barnfull of horses for the winter.  Her work is solitary, and Jamie longs for interaction with someone.  With anyone.  Enter young attorney Beth Travis – supplementing her income by teaching an education law class to a small group of local high school teachers.  Jamie sits in on the first class, is impressed with Beth, and drives her to the local diner after class so she can wolf down some dinner before her four-hour drive home.  This pattern continues until Beth finds another (closer) lawyer willing to teach the remaining class sessions.  Upset that she won’t see her new friend again, Jamie drives the four hours to Livingston, Montana, to make contact with Beth.  This is not a lesbian story.  Rather, Jamie is a very lonely person – unable to understand why her affection for Beth remains unrequited.  Is it because Jamie is a woman?  These questions are never answered – at least in an obvious, Hollywood fashion – but they force us to think about what we’ve seen on the screen.

The performances are solid, and Reichardt’s screenplay (based on short stories by Maile Meloy) is noteworthy for its absence of dialogue in many instances.  Certain Women is a film (again, like The Station Agent) in which as much is said through facial expressions and lack of conversation than through standard discourse.  When Jamie drives to Livingston to see Beth, the two women speak almost no words – yet they speak volumes.  Reichardt considers us intelligent enough to fill in the blanks.  We’re expected to know what each character feels and believes.  I appreciate that.

If I could fault Certain Women in two areas, it would be that the script is almost too sparse.  There are instances in which a little extra dialogue might have actually helped.  Likewise, Certain Women features almost no music.  I realize that’s for affect, but I missed it.

Second, Reichardt tries too hard to connect these independent stories the way Robert Altman used to do in his large-cast pictures like Nashville.  I’m a big fan of Altman’s 1993 feature Short Cuts, in which almost none of the stories intersected.  That didn’t bother me a bit, and it shouldn’t have bothered Reichardt.  Particularly awkward is the fact that Laura is having an affair with Gina’s husband Ryan.  For such a marriage-destroying device to be used to intertwine two disparate stories passes for script desperation.  The affair has no bearing on either story, and should have been omitted.

Certain Women is no masterpiece.  But it’s a small film which incites discussion after a viewing.  This is a picture you’ll think about for several days before forming an opinion.  With Oscar season upon us, this probably isn’t one which will receive accolades.  Certain Women is destined to remain at the “film festival” level for all eternity.  But it is worth a watch, unless you despise arthouse indies.