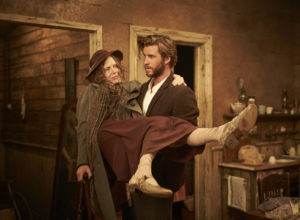 I’ve never been a fan of movies where the protagonist either moves to or returns to a small town full of eccentric characters.  The townsfolk are almost always so over-the-top as to be unrealistic.  Think the Chevy Chase disaster Funny Farm from 1988, or any number of holiday films in which the lead character visits a houseful of bizarre relatives presented more as caricatures than as real people.  Given this poor track record, I held out very little hope for Jocelyn Moorehouse’s The Dressmaker – an Australian film in which an educated European dressmaker returns to her hometown to care for her aging, mentally unstable mother amidst a bevy of idiosyncratic citizens.  Sounded like a recipe for disaster to me.  And perhaps these low expectations are what endeared The Dressmaker to me.  Is it perfect?  No.  But it’s certainly much more entertaining than I had anticipated.

Kate Winslet (one of our finest contemporary actresses) plays Myrtle “Tillie” Dunnage, who steps off a train in the middle of the night in the fictitious Australian outback town of Dungatar, and announces (to no one in particular), “I’m back, you bastards.”  Already we know something untoward has happened in Tillie’s past, and we’re about to find out what.  Fortunately, The Dressmaker isn’t told in a series of flashbacks, as are so many of today’s features.  While we do get an occasional grainy, black-and-white flashback to Tillie’s childhood, the plot revelations are presented by the locals.  And the hidden mysteries of Tillie’s past are peeled back like the layers of an onion, rather than as a single speech by one of the residents.  This choice of Moorehouse’s (and fellow screenwriter P.J. Hogan’s) keeps us interested from the get-go.  The Dressmaker is as much a mystery as it is an unusual-character comedy.  The source material here is Rosalie Ham’s 2000 novel of the same name, and the deft screen adaptation by Moorehouse and Hogan is first-rate.

Tillie’s mother Molly (known amongst the townfolk as “Mad Molly”) is played to the hilt by veteran British actress Judy Davis.  The others include a secretive town counselor and his recluse wife (who makes him take off his shoes when he comes home, and walk only on the newspaper), a cross-dressing police officer, the town hunk and his developmentally disabled brother, a vicious schoolmarm, and a fire-and-brimstone hunchback pharmacist who thinks his customers are all going to hell.  Again, this sounds worse than it is.  These characters are at the least amusing (the pharmacist), and at the most fully-developed (the town hunk).

The cross-dressing policeman (who actually turns out to be a matured character, and vital to the plot) is played by Hugo Weaving, most recently seen in The Hobbit series.  The hunk is played by Liam Hemsworth from the Hunger Games series.  And, don’t you know, he develops an attraction to Tillie when she attends one of his Australian Rules football games wearing a dress so provocative as to distract the players.  As their romance develops, the residents warm up to Tillie, and soon she’s the “Extreme Makeover” queen of Dungatar.

For reasons we’ll learn in due time, the town counselor invites a competitor dressmaker to Dungatar as competition to Tillie’s enterprise.  The plot thickens when Tillie realizes she may have committed a murder in her youth, but the only witness was the developmentally disabled boy.  What sets up as nothing more than a townful of crazies morphs into an interesting group of plot facilitators.

While The Dressmaker proceeds as a light-comedy/revenge picture, the final act reminds me more of a British Monty Pythonesque comedy, in that many of the characters meet with fatal endings.  Indeed the final scene is victorious only for those viewers dead-set on retaliation being carried out at the most severe degree.  I suppose I would have preferred a more traditional ending (and when was the last time you heard a critic say that?), although I can’t imagine what form that might have taken.

I did enjoy The Dressmaker, although it does not rank among the year’s very best.  I would like to see Kate Winslet and especially Judy Davis nominated for acting Oscars, but I suspect they’ll both be in crowded fields.  And while I realize Kate Winslet has been nominated many times and has won once, I believe she deserves to be nominated for this performance as well.  Davis is long overdue for an Oscar.

I wouldn’t be surprised to see The Dressmaker linger at theatres throughout the crowded fall and winter seasons in much the same way Wes Anderson’s The Grand Budapest Hotel hung around the entire first half of 2014.  It’s just quirky enough for word of mouth to propel The Dressmaker to a hit motion picture (at least as adult films go).  I believe the Coen Brothers expected Hail, Caesar to be the “unconventional comedy” of 2016.  It wasn’t.  The Dressmaker is a much better film.