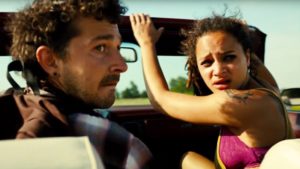 Andrea Arnold’s American Honey begins with a segment reviewing the present life of an 18-year-old Oklahoma girl named Star (played by newcomer Sasha Lane).  She’s taking care of two children who are not her own; she lives with a man who appears to want only her body; she has no job, and she has no future.  Star is so poor she rummages through dumpsters to find dinner.  One day she leaves her life behind to join a wild, spirited, hard-partying group of teens and young adults who make their living selling magazine subscriptions as they traverse the Midwest in an old full-size van.  And there you have the premise of American Honey.

If this sounds boring, it is anything but.  This is a fascinating, if slightly uneven, look at the adolescent underbelly of society.  Each of these undisciplined young people seems to have come from both poverty and broken homes.  They all sport tattoos and body piercings of various sorts.  They all drink (typically straight from the bottle) and they all smoke (anything that burns).  What endears me to this film (British director Andrea Arnold’s first American venture) is the episodic nature of Star’s adventures.  American Honey features an original screenplay (also by Arnold), but it feels like a novel.  Each day’s magazine sales effort brings a new adventure – and the people Star meets along the way are unique, developed characters, which simply do not feel like the standard stock characters we see in so many Hollywood productions.

Top salesman and company assistant manager Jake (played by Shia LaBeouf, the only big-name star in the entire cast) shows Star his successful methods for garnering magazine orders.  Feeling uncomfortable with his approach, Star devises her own selling strategy.  Rather than the usual hit-or-miss door-to-door sales through wealthy suburban neighborhoods, Star hitchhikes and accompanies potential customers as they go about their daily lives.  After talking with them for a while, they eventually inquire what she’s doing.  She then sells great quantities of magazine subscriptions because her customers feel like they know her.

Among her experiences, she meets a family-man truck driver who listens to Bruce Springsteen, three rich cowboys in a convertible who like to barbeque, and a prosperous but sexually lonely oilman.  While American Honey is almost three hours long, it doesn’t feel like it.  I could have watched Star’s escapades all day.  The screenplay is absolutely unique; I’ve never seen anything like this before, and I don’t expect to ever see an analogous film.

I was a little disappointed in the somewhat sudden ending.  American Honey feels like it simply stops – that I truly could have watched Star’s escapades all day long.  While I typically don’t feel like screenwriters need to tie up every loose end, I would like to have known if Star’s affair with Jake (who supposedly loves his immediate boss Krystal) ever materializes into a lasting relationship.  I would like to have known what happens to some of the other sales crew.  (There are too many for Arnold’s screenplay to focus on each one, but there are a few whose stories I found interesting.)  But much as with Peter Bogdanovich’s The Last Picture Show, maybe I’m not supposed to know.  Perhaps it’s best if each of us imagines the futures of these interesting characters on our own terms.  With that in mind, I hope Arnold never makes a sequel.  Yes, I want to know the rest of the story, but I’d like to imagine it my own way.  And therein lay the beauty of American Honey.  Arnold provides us with a host of entertaining individuals, gives them a very loose plot, and then expects us to fill in the rest.  I love when a director treats me as an adult – without spoon-feeding me some improbable Hollywood plot twists simply to draw the picture to a conclusion.

I do believe the ending of American Honey indicates that Star has finally found the family structure missing from the first eighteen years of her life.  Perhaps the same is true of the others.  Featuring a cast of drunk teenagers discovered on California beaches (none of whom had any acting background – including Sasha Lane, who deserves to be nominated for a Best Actress Oscar), American Honey has that realistic feel to it that very few movies do.  Robert Altman’s Nashville comes to mind – and that’s some very high praise.

I must mention the soundtrack.  Filled with a wide variety of contemporary music, Arnold’s characters are responsible for, or actually respond to, almost all the material.  In other words, the music we hear (and there’s a lot of it), either comes from someone’s iPod, from the van’s radio, or from a television.  The characters then dance to the music, or sing along to it – as opposed to standard Hollywood fare, in which music simply shows up out of nowhere to indicate the passage of time.  Think Rocky Balboa’s training regimen in Rocky.  Instead of showing us each day’s workout, Bill Conti’s music was played over a montage of body-building scenes.

The music in American Honey is completely different.  When it plays, the characters experience the music right along with us.  The music is part of the film.  That distinctness caused me to notice the music in a way that I typically do not.  Furthermore, Arnold allows almost every song to play out in its entirety.  This too is unique, and forces us to pay attention to the music that supports the lives of these characters.

Again, there are a couple disjointed moments in American Honey, but for the most part this is one of the best, and certainly most unique, films of the year.  I wouldn’t be at all surprised to see this one at Oscar time – particularly for Sasha Lane (who was indeed discovered while on her spring break) and for Andrea Arnold.  American Honey doesn’t rise to the “masterpiece” level of Richard Linklater’s 2014 classic Boyhood, but it comes staggeringly close.