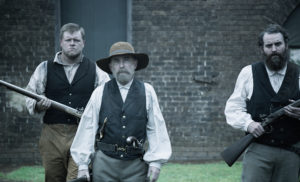 21 years before Harriet Beecher Stowe published her landmark novel “Uncle Tom’s Cabin,” and 28 years before John Brown’s raid on Harper’s Ferry, a Virginia slave named Nat Turner led an uprising against landowners in southeastern Virginia.  It’s difficult to mark the start of the American abolitionism movement, but this episode is as good a starting point as any.  Slaves had been mistreated for years, and Turner (a slave and preacher) felt a divine intervention to lead such a revolt.

Retelling Turner’s story to near perfection, actor Nate Parker makes his directorial debut with The Birth of a Nation, documenting the first notable time a slave stood up to his superiors.  Born in Africa in 1900, Nat Turner was taught to read by his owner’s wife Elizabeth (Penelope Ann Miller), who sensed a spark of intelligence absent in most of the plantation’s servants.  After finding a calling preaching the Word of God to his fellow slaves, his owner Samuel (Armie Hammer) devises a money-making scheme in which he takes young Nat around to other plantations to deliver sermons to fellow slaves.

At first Turner quotes Bible verses pertaining to the righteousness of obeying one’s master, and serving him with respect.  As slave masters go Samuel is more lenient than most, but after witnessing a few ugly occurrences on other farms (as well as the rape of his wife by a visiting acquaintance of Samuel’s), Nat’s Biblical citations turn to those verses which call for the empowerment of the oppressed to rise up and demand justice from those who have wronged them.  Deducing a solar eclipse to be a sign from God, Turner persuades his equally-discontented captives to gang together on a killing spree, massacring every despot in the area.  Eventually captured, Turner was hanged for his actions (as he surely must have expected), but not before inciting a movement which would result in America’s bloodiest war, followed by eventual freedom.

Not much is known about Nat Turner (although the eclipse story is documented), obligating Parker to fill in some of the blanks.  We learn that his boyhood tribal leaders marked Nat as a future leader and achiever of great things.  In America, we meet his mother, grandmother, and wife Cherry (Aja Naomi King).  In my least favorite scene, Nat begs Samuel to buy Cherry at an auction to save her from an apparently harrowing life.  Their eyes lock, they smile, and we correctly assume the two will one day wed.  Not only does this “cutesy” scene not belong in such a serious story, but I don’t like how Parker uses the mechanism of human ownership to “select” a potential mate.  Nat appears to be playing along with the institution he so despises.

What did I like about The Birth of a Nation?  Darn near everything else.  While not perfect, Parker gives the best performance of his young career as the enlightened and newly-rebellious Turner.  But his direction is superb.  He creates an understated cult of personality around Turner – which is virtually required, given the task of summoning the physically and mentally abused to violent revenge, what with the known consequences.  I like how Turner’s preaching begins to energize as he establishes a life purpose.  I even like the more difficult scenes depicting the mistreatment of slaves by the more stringent masters.  Squeamish?  Yes.  But necessary, given the fact that slavery is the most horrific chapter in American history.

I especially liked the depictions of Turner’s masters.  While Samuel is presented as somewhat of a “nice guy” (as slave owners go), he’s not above brutal floggings and harsh punishment.  And while Elizabeth is kind enough to teach young Nat read (in the mansion, no less), she’s not above insulting her servants – even with company present.  The modern-day lesson here is that sometimes even the most well-intentioned whites (read: police) are still capable of quashing those they might find threatening (read: innocent blacks).

The Birth of a Nation is, in fact, a very “modern” film.  It takes the racial issues of the day and personifies them through the telling of a 185-year-old story.  Early in his American life, Nat bemoans the killing of a fellow slave as, “dying for no reason.”  And haven’t we heard that phrase used in the recent dearth of black Americans assassinated at the hands of law enforcement?  I saw The Birth of a Nation with an audience comprised mostly of African-Americans.  After the viewing, as we were milling about the parking lot looking for our keys and cars, a couple audience members shouted, “Vote!  Vote!  Vote!  It’s the only way to stop this!”  I’m not certain this is the result Parker was looking for, but if his film empowers the disinterested to take a passion in American democracy, then I say “Thank you!”

A note about the title:  Yes, The Birth of a Nation was also the name of D.W. Griffith’s 1915 masterpiece saluting the KKK.  (And I call Griffith’s picture a masterpiece merely because of its importance in film history.  It was the first “long” film – a twelve-reeler, lasting over two hours.  Griffith proved that the film medium could be used for educational and persuasive purposes, involving more complex storylines than theretofore imagined.)  Parker has intentionally re-used the name so that when we google The Birth of a Nation, we find Griffith’s controversial affirmation of institutional racism right alongside Parker’s celluloid depiction of a means of ending it.

My primary complaint, unfair though it may be, is that The Birth of a Nation is not Twelve Years a Slave.  Coming just three years after Steve McQueen’s Oscar-winning Best Picture, Parker’s film can’t help but avoid inevitable comparisons.  While both offer realistic and disturbing depictions of the horror of slavery, McQueen not only made it to the finish line first, but his picture contained (a) an uplifting ending, and (b) images I shall remember the rest of my life.  The Birth of a Nation does not.  Similarly, there have been many great films about the Holocaust.  But since 1993, I always find myself saying, “It wasn’t Schindler’s List.”  Same deal here.  The Birth of a Nation is a great film.  It begs to be seen.  But it can’t help but falling short of the gold standard created by McQueen.

And he serves as a film historian for http://www.thefilmyap.com/