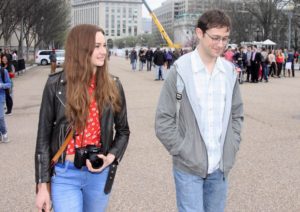 I’ve missed Oliver Stone.  The auteur of such masterpieces as Born on the Fourth of July and JFK hasn’t released a non-documentary film since W in 2008.  Now he gives us Snowden – a picture he was practically destined to make.  It has everything Stone likes – tension, a good conspiracy theory, and an American government with something to hide.

If you saw Laura Poitras’ 2015 documentary Citizen Four, you owe it to yourself to now see Snowden.  If you missed the Poitras feature, might I suggest you watch Stone’s film first.  Although sluggishly told through flashbacks, Snowden chronicles Edward Snowden’s career in U.S. intelligence beginning with his ill-fated days as an inept army foot soldier to his 2013 revelation that the National Security Agency was systematically tracking the cell phone and social media activity of every American and many others around the world.  Snowden provides the necessary background to then view Citizen Four as a companion piece.  Citizen Four tracks, in real time, Edward Snowden’s interviews with Glenn Greenwald and Ewan MacAskill of “The Guardian” – the British daily and champion of journalistic freedom.

Stone’s film stars Joseph Gordon-Levitt as the nerdy computer genius who joined the CIA as a George W. Bush republican before exposing the unconstitutional surveillance program.  Quickly rising to the top of his CIA training class, Snowden is soon assigned to top secret projects within the agency – where he has access to classified information.  As you might expect, Snowden is depicted as a patriot.  Much as with director and co-screenwriter Stone, Snowden loves his country – so much so that he hates to see the U.S. deprive its own citizens of their Fourth Amendment right to privacy.

While each discovery is intriguing, I was impressed with Stone’s focus on Snowden’s relationship with his girlfriend Lindsay Mills, played by the always engaging Shailene Woodley.  Although there is no reason to include this side story from a plot perspective, these are the scenes that depict the human side of a man many Americans still consider a traitor for exposing government secrets.  An employee of the U.S. State Department, Mills is also intelligent, nerdy, and curious.  As Snowden’s work becomes increasingly classified, his relationship suffers but the two never fall out of love – as though they each realize they’ll never find another more perfectly suitable, given their brainy, socially awkward demeanors.  These scenes tame the proverbial beast that is Edward Snowden, heretofore known to most as a self-righteous whistleblower.

Some have criticized Snowden for the lack of urgency found in many of Stone’s pictures.  That didn’t bother me so much.  After all, today’s wars are won and lost in front of a laptop – not in combat.  I believe Stone’s biggest misstep was couching his story within the context of Snowden’s Hong Kong hotel room interviews with Poitras, Greenwald, and MacAskill.  I typically prefer a lineal storyline, and it is my opinion such a structure would have made this film easier to follow.

As is typical in an Oliver Stone picture, the performances are all top-notch.  Gordon-Levitt does an outstanding job capturing Snowden’s socially apprehensive nature, and then playing it off his desire to do right.  This could win Gordon-Levitt a Best Actor nomination.  Melissa Leo as Laura Poitras, Zachary Quinto as Glenn Greenwald, and Tom Wilkinson as Ewan MacAskill are each perfectly suited to their roles.  I was most impressed with Rhys Ifans as Corbin, Edward Snowden’s CIA instructor and longtime confidant.  Corbin is serious when he needs to be, while always providing Snowden the guiding hand he needs as he navigates the complex intelligence community.  My favorite scene depicts a phone call between Snowden and Corbin in which Corbin’s commanding presence is plastered across an entire wall in a condescending fashion.  He begs Snowden to keep the surveillance information private, but to no avail.

While I would never put Snowden on the same pedestal as some of Stone’s earlier masterpieces, it is better than I expected, and at two-and-a-quarter hours, it moves along quickly.  There is a lot of information here to digest.  Snowden almost begs to be seen twice.  And then watch the Poitras interview documentary Citizen Four.  You’ll see Edward Snowden in perhaps a different light – more as an American hero than as a traitor.