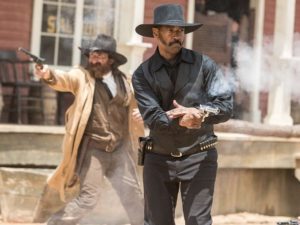 Antoine Fuqua’s latest film is a remake of the John Sturges classic The Magnificent Seven (which itself was an American adaptation of Akira Kurosawa’s 1954 masterpiece The Seven Samurai).  While the update certainly makes for an entertaining romp, I’m left wondering why this material required a renovation in the first place.

The story is fairly simple.  A band of seven outlaws is hired to defend a helpless town against outside forces of evil.  It’s a setup for a classic western – and in that respect, Fuqua’s Magnificent Seven doesn’t disappoint.  In the 1960 version, the seven gunfighters worked to protect a small Mexican village from a group of bandits.  Here they work in service of the fictitious American town of Rose Creek in the post-Civil War West.  Instead of a siege of raiders, this community suffers from the harassment of an industrialist land developer (read: overbearing capitalist) who intends to force the residents to give up their land for pennies on the dollar.  The tycoon (Peter Sarsgaard, at his most nefarious) shows he means business by gunning down those who would question his motives – right in the town square in broad daylight.  While the townsfolk consider their options, the wife of one of the deceased residents (Haley Bennett) takes matters into her own hands.  She hires bounty hunter Sam Chisholm (Denzel Washington) to defend Rose Creek from the magnate, Bartholomew Bogue, by using any means necessary.

Much as with Yul Brenner’s lead character in the 1960 film, Chisholm is a gunslinger with a heart.  He genuinely feels for the besieged locals, and vows to protect their village from the outside forces.  As Bogue’s men are heavily armed and dangerous, Chisholm has quite a task ahead of him.  He quickly finds six men to assist him, and stockpiles loads of weaponry, ammo, and explosives.  And thus we have the making of a classic Western.

As you might imagine, each of Chisholm’s hires specializes in certain munitions or trickery.  Josh Farraday (Chris Pratt) is a gambler and master of blowing things up.  Goodnight Robicheaux (Ethan Hawke) is a sharpshooter and former Confederate hero.  Vincent D’Onofrio plays Jack Horne, a tracker.  The other three are somewhat token characters – a Mexican (Manuel Garcia-Rulfo), an Asian (Byung-hun Lee), and a Comanche warrior (Martin Sensmeier – who is actually of Native American descent).  The use of these stock characters may seem politically incorrect in this day and age, but remember that Sturges’ version featured a Mexican, an Irishman, a Cajun, an Englishman, and so forth.  And this time the roles are less stereotypical.  For instance, Chico – played by Horst Buchholz, who (to my knowledge) had not one drop of Mexican blood – was a somewhat unreasonable hothead in the earlier film.  The character of Vasquez (Garcia-Rulfo) is more fleshed-out this time around.

As you might imagine, the final, drawn-out confrontation is the highlight of The Magnificent Seven.  And while this shootout certainly doesn’t disappoint, it has more in common with Sam Peckinpah’s The Wild Bunch than it does the 1960 go-‘round of The Magnificent Seven – at least in terms of sheer carnage.  When the curtain finally closes, we feel as though we’ve been through the proverbial ringer.  Want to get the life zapped out of you?  Watch the last half-hour of The Magnificent Seven several times in a row.

But as with every good Western, its success often stems from that quiet, middle section of the screenplay, in which we (a) get to know more about each character, and (b) see the seven gunslingers interact with the townsfolk.  Unfortunately, this remake lacks the personal, human touches of the earlier version – such as Charles Bronson befriending some of the town’s little boys.  Yes, Bronson couldn’t act his way out of a paper bag, but that side-story gave the outlaws a sense of vulnerability which is lacking in this production.  Instead, screenwriter Nic Pizzolatto takes the easier road by adding humorous dialogue not found in the 1960 picture.  While some of the lines are very funny, the sight of the gangsters poking fun at the townspeople’s lack of sharpshooting ability does not necessarily endear them to us.  In fact, Pizzolatto and Fuqua are so intent on moving straight to the big showdown that we never have the chance to get to know any of the locals.  The preacher is simply a preacher; the sheriff is just a sheriff.  What makes them tick?  What are their family situations?  We’ll never know.  But boy do we get a gunfight!

Contrast this to Quentin Tarantino’s most recent effort, The Hateful Eight (also a Western), in which his screenplay gives us enough dialogue to cause the characters to sizzle with excitement.  Here we learn precious little, other than they’re all great shots, and very clever with a one-liner.

There’s a lot to like in The Magnificent Seven (particularly D’Onofrio’s performance, which might just earn him a Supporting Actor nomination), but any time I can successfully predict the forthcoming scene, I can’t recommend the film.  There’s a better Western out now called Hell or High Water.  Taking place in modern day Texas, it tracks the plight of two young bank robbers and the sheriff assigned to bring them down.  It too features a climactic shootout (complete with explosion), but oh the characters.  In Hell or High Water, you’ll spend time with three of the most entertaining characters to come along in any motion picture so far this year.  In The Magnificent Seven, you’ll see one of the best shootouts ever filmed.  Take your pick.

He also serves as a film historian for http://www.thefilmyap.com/