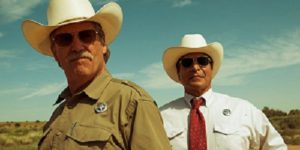 In David Mackenzie’s new film, Hell or High Water, two West Texas brothers rob a series of banks to save their family farm from foreclosure, while an old Texas Ranger desperately wants to capture them, to give himself one more victory before retiring.  Sounds like pretty standard fare – perhaps mildly entertaining, but fairly standard stuff, right?  Wrong!  Mackenzie turns in his best film ever in this supremely entertaining romp through postmodern oil country and a series of quirky Coenesque characters.  This is the best film I’ve seen so far this year!

Chris Pine (from the recent Star Trek films) plays Toby, the smarter of the two brothers.  He’s a divorced dad, furiously attempting to provide for his young sons and ex-wife.  His farm is in the process of foreclosure, thanks to the oversaturation of the gas market which has destroyed the West Texas economy.  His seemingly hair-brained scheme is to rob a series of banks – all branches of the bank depriving Toby of continuing in his family business.  He then places the money in a trust – with the same bank – to provide for his sons.  We soon learn Toby is not as dumb as he first seems.

To carry out this dangerous and risky plot, Toby employs the “talents” of his hot-tempered brother Tanner (played by Ben Foster, who played Angel in the third X-Men film, and a previous Oscar nominee for the tragically underseen 2007 western 3:10 to Yuma).  Tanner has recently been released from another stint in prison, and he’s the type who’s destined to wind up back in the hoosegow again.  Tanner is a pro at bank robbing, and he handles the nuts and bolts of Toby’s strategy.  Toby’s job is to keep Tanner focused, and make sure he doesn’t do anything stupid – a more difficult task than meets the eye.  The interplay between Toby and Tanner is engaging, and screenwriter Taylor Sheridan doles out backstory information only on a need-to-know basis.

But the brothers’ interaction pales in comparison to the interplay between the two Texas Rangers.  Jeff Bridges plays Marcus – hellbent on pulling off one more grand apprehension on the eve of his retirement.  Gil Birmingham (Billy Black in the Twilight series) is Alberto – a Native American and Latino-American, who receives the bulk of Marcus’ politically incorrect taunts.  When Alberto reminds Marcus of his Hispanic heritage, Marcus quips, “I know; I’ll get to that as soon as I run out of American Indian insults.”  Their witty banter is like something out of a Coen Brothers or Quentin Tarantino film.  In fact, Hell or High Water is so similar in nature to the Coen’s work, I kept having to remind myself that they had nothing to do with this effort.

Jeff Bridges cemented his reputation as one of the great American actors of my lifetime with his Oscar-winning performance in 2009’s Crazy Heart.  While some actors might have seized the opportunity to retire, Bridges continues to churn out memorable role after memorable role.  He’s so good here he deserves a Best Supporting Actor nomination.

Consider that the first time most of us saw Jeff Bridges, he was playing the cocky young Duane in Peter Bogdanovich’s 1971 classic, The Last Picture Show.  Set in the desolate West Texas landscape of 1951, The Last Picture Show featured Bridges and Timothy Bottoms as two high school seniors with no clue as to their futures, in a brilliant and heartwarming coming-of-age story.  Now 45 years later, Bridges plays the old man (as Oscar-winner Ben Johnson did so in Picture Show), while Pine and Foster play the young whippersnappers.  The barren landscape and eccentric characters inhabit both stories, and Bridges adapts so well to each role that these two films would seem to bookend his long career.

Bridges is a scene stealer in Hell or High Water.  His ongoing diatribe against banks with inoperable video surveillance is a hoot.  But he is smart enough to realize that this is Pine’s and Foster’s story.  He’s willing to accept a smaller but juicier role, while allowing the young stars to shine in the best film either one of them has made so far in their budding careers.

While the clever repartee between Bridges and Birmingham is very amusing, Hell or High Water features a bevy of memorable supporting characters, most notably character actress Margaret Bowman as a foul-mouthed waitress with a sad-sack face, who steals a scene in a greasy-spoon restaurant as the two lawmen stake out the next robbery.

But Hell or High Water is not all fun and games.  Foster’s character Tanner is a hardened criminal, and the two lawmen are not coquetting their way through their work.  This is serious business, and the final shootout is not for the faint of heart.  Given the vigor of the story, the humor serves not only to entertain us but to diffuse the intensity.

And much as in Alexander Payne’s great 2011 picture The Descendants (in which the state of Hawaii was practically a character in and of itself), the bleak West Texas land is essentially a character here.  Wallowing in the post-gas boom of the twenty-teens, West Texas has mercilessly masticated all its inhabitants – sparing no one, even those not affiliated with the gas industry.  The bankers use extra caution when loaning funds.  The restaurants are reeling from lack of business.  “Foreclosure Sale” signs dot the once energetic vista.  It is the Texas economy itself which sets our story in motion.  And it is Texas which gobbles up those intent to get crossways with its laws and customs.  In fact, laws and customs appear to be the only remnants of Texas’ once prosperous lifestyle.

The final scene is one to behold.  Reminiscent of the scene in Wolf of Wall Street in which a helpless FBI agent meets with Leonardo DiCaprio’s Jordan Belfour on his yacht – able to see the fruits of Belfour’s corruption, but unable to trace him to any specific crime – Bridges’ Marcus visits Toby on his farm, only to leave without any shred of implicative evidence.  Remember, Toby is not nearly as dumb as we are first led to believe.

Hell or High Water is an excellent film.  Its pacing is reminiscent of the classic Westerns of yesteryear – an action-packed first act; then some down-time, where we learn about the characters; followed by a powerful finish.  If given the chance, I wouldn’t change a thing.  Will I see a better picture this year?  Possibly.  But I wouldn’t bet on it.  Even though Mackenzie’s previous work has mostly flown under the radar, I bet that we’ll see this one at Oscar time.