Eat That Question: Frank Zappa in his Own Words 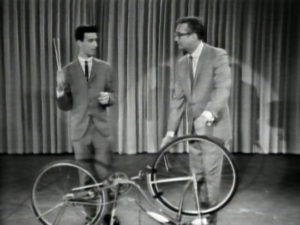 What does the “average” American know about rocker Frank Zappa?  Well, we probably remember him for his novelty songs – “Dancin’ Fool” which parodied the disco lifestyle of the 1970s, “Valley Girl” which parodied the insipid materialism of the 1980s, and perhaps “Don’t Eat the Yellow Snow” which parodied… I don’t even know what. Many of his songs were filthy. He named his children Dweezil and Moon Unit. He was stranger than Weird Al Yankovic, and he didn’t have much impact on rock music.

Boy is that an incorrect assessment!  Frank Zappa was one of the most brilliant musicians and free speech advocates to ever grace a concert stage. The two greatest Zappa tragedies are (a) he died far too young, and (b) most Americans know very little about him. Thorsten Schutte’s new documentary Eat That Question: Frank Zappa in his Own Words tries to change the second of those tragedies, and I give him a “B” for his efforts. I’m not sure I learned anything about Zappa I didn’t already know, but he’s such a fascinating person I could watch old Zappa interviews all day long and never get bored.

Zappa’s music was impossible to categorize. Much of it was biting social commentary. Some of it was cacophonous sounds played on instruments and other props. Some of it was orchestral. Some of it was rock. Jazz. Blues. Zappa wrote and performed more music in his 53 years than most musicians do in 80. But it was never dull.

One Eat That Question scene I liked showed an old black and white recording session featuring Zappa conducting a violin, cello, trombone, soprano vocalist, and a few other props I couldn’t even recognize. Zappa had based this composition on Igor Stravinsky’s “Rite of Spring.”  Show me a current rock star who even knows who Stravinsky was, let alone “samples” his music. Was the music in this clip any good?  Well, I didn’t like it, but it was admittedly original. And Zappa freely admitted he composed music he’d like to listen to in his own home – not necessarily for the masses.

My favorite clip showed a young non-mustachioed Frank Zappa appearing on the old Steve Allen show. Zappa and Allen “played” spinning bicycle tire spokes (with drum sticks and other articles) while a few members of Allen’s house band played music. Per Zappa’s request, they were instructed to “just play anything; don’t worry about the notes.”  To say this was experimental music is an understatement. Allen tried to make light of the musical discord for his older audience, and in doing so, proved he did not have a clue as to the purpose for Zappa’s appearance. Zappa always contended that any sound could be a component of music. And he took his music in wildly divergent directions throughout his career.

Besides originality, Frank Zappa’s music pushed the envelope of societal acceptability. Many considered his lyrics obscene, but in an interview clip, Zappa explains there are no dirty words; that the English language is a very specific language. There are words available for any situation imaginable, and Zappa explains when he says, “Go f*** yourself,” that’s exactly what he means, and no other words will express his feelings as accurately.

The climactic scene of Eat That Question shows Zappa testifying before the senate committee debating Tipper Gore’s PMRC movement. That stands for Parents’ Music Resource Center – an effort to affix labels to record albums indicating offensive lyrics. Zappa cited a violation of artists’ First Amendment right of free speech – claiming the establishment of a ratings system “opens the door to an endless parade of moral quality control programs based on things certain Christians do not like.”  And look where we are today!  Those “certain Christians” continue to suppress perceived moral threats, while at the same time popular music has become so crude radio stations are forced to play edited “clean” versions of half the material on their playlists.

Zappa was a visionary, and his mere presence on the music scene is sorely missed. His 1993 prostate cancer death just prior to his 53th birthday is, in many ways, the greatest musical loss since John Lennon. And as a Zappa fan, I was engrossed in the old interview clips, but again, I don’t know that I learned much. This is a case where a voice-over narrator might have helped clarify Schutte’s fascination with his subject. I also would have liked for Schutte to date each interview, and to let us know the names and positions of the interviewers. Other than Steve Allen and Connie Chung, I’m not sure I knew any of the interviewers, and a couple interviews seemed liked family-room discussions on a couch. Who were these people?  When did these interviews occur?

But those qualms aside, I did enjoy Eat That Question, and I would recommend it to any Zappa fan, obviously, but also to any fan of today’s popular music. We think of certain rappers and hard rockers as spokespeople for today’s generation. Please do yourself the 90-minute favor of exploring the genius of Frank Zappa. You’ll learn that Zappa did not do drugs, nor did he allow his bandmembers to do them while on tour. You’ll learn that he was not obsessed with the act of sex, the way some of today’s musicians seem to be. You’ll learn that he understood more about our country and its Constitution than many members of Congress. And you’ll see what a great talent you missed.

And as for director Thorsten Schutte, for your next film would you please provide us with an in-depth interview with Paul Simon?  I’d like to get inside his head too.