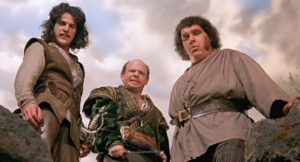 What a year this has been for the Indianapolis Museum of Art’s outdoor film series.  It has featured (or will feature) some of the greatest motion pictures ever made (Close Encounters of the Third Kind, West Side Story), a couple gems from the 1950s (Rebel Without a Cause, Roman Holiday), and a couple more contemporary music-themed productions (Dirty Dancing, Moulin Rouge).  But, in a way, they’ve saved the most enjoyable treat for last.

Friday August 26th brings us Rob Reiner’s 1987 cult classic The Princess Bride – a postmodern fairy tale featuring unrequited love, a damsel in distress, swashbuckling, fencing, and comedy.  Plenty of comedy.  I call it a cult classic because it wasn’t a huge box office hit upon its release.  But its popularity increased by word of mouth after it was released to video in 1988.  Now it’s considered one of those “must see” pictures whose viewing is a rite of passage.  But (much as with The Rocky Horror Picture Show), this one deserves to be seen on the big screen.

Peter Falk plays a lovable grandpa whose grandson (a pre-“Wonder Years” Fred Savage) requests he read a bedtime story.  This framework immediately paints our story as a fable, and that’s important.  We need to know upfront that Reiner is not aiming for big-budget special-effects-laden excess; that his intent is to keep this story “small.”  The result is that The Princess Bride is not only relatable but also lovable.  Its old-fashioned narrative couched in a modern sensibility strikes a chord with the child in all of us, and has kept it a favorite for many years.

Buttercup, a renaissance era princess, is in love with her family farmhand Westley.  Considering marriage, Westley leaves the farm to seek his fortune.  Buttercup learns Westley’s ship has been attacked by an evil pirate.  After five years, she involuntarily agrees to marry Humperdinck, the crown prince.  But Humperdinck is more interested in starting a war against a neighboring country, so he plots to have Buttercup killed.  Hired to perform this dirty deed is a trio of misfits – a Sicilian, a Spanish swordsman, and a giant.  Before the malicious act can be carried out, Westley returns to marry Buttercup, but is later captured by Humperdinck and sent to a torture chamber under the direction of the heinous Count Rugen, who turns out to be the man who killed the Spanish swordsman’s father years earlier.

As you can see, this tale features old-fashioned storybook clichés updated for present-day viewers.  Reiner’s directing is deft, and his cast is top-notch.  Robin Wright makes her big-screen debut as Buttercup, and Westley is played by Cary Elwes.  Elwes was best known for his straight-faced performances in utter slapstick films like Mel Brooks’ Robin Hood: Men in Tights, and the Zucker Brothers’ Hot Shots!  Here, his character is more fleshed out, and he revels in the fun of playing in more tender-hearted fare.  Broadway, bigscreen, and television star Mandy Patinkin plays Inigo, the Spanish swordsman, who utters the film’s most memorable line, “My name is Inigo Montoya; you killed my father; prepare to die.”

The Princess Bride features a first-rate supporting cast, including playwright/actor Wallace Shawn as the Sicilian, championship wrestler Andre the Giant as the giant, screenwriter/director Christopher Guest as Count Rugen, and Billy Crystal as a delightfully bitter magician.  All this adds up to one fun time at the movies, and an experience you won’t soon forget.  As this tends to be an audience favorite, I recommend purchasing tickets soon.