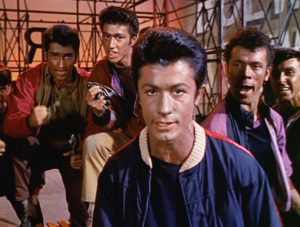 In 1957, composer Leonard Bernstein, Broadway director Jerome Robbins, and playwright Arthur Laurents redefined the American musical with “West Side Story.”  The dark subject matter was forbidden love set against the backdrop of two New York street gangs.  The music was loud and brassy, and the extended dance sequences made some older audience members uncomfortable.

“West Side Story” was a hit alright, but it lost the Best Musical Tony to Meredith Wilson’s “The Music Man.”  Following a nationwide tour in 1959, veteran director (and native Hoosier) Robert Wise adapted West Side Story for the big screen.  It became the second highest-grossing film of the year.  It was nominated for eleven Academy Awards, and won ten of them – still a record for motion picture musicals.

Fortunately, we have the opportunity to see this classic motion picture musical later this summer, as part of the Indianapolis Museum of Art’s outdoor summer series.  You won’t want to miss this one – especially if you’ve never seen it before.  Now before you sigh and complain that old musicals are dated, stodgy, and unnecessarily cheerful, let me tell you about West Side Story.

The Jets are a white gang, and the Sharks are a Puerto Rican gang – each fighting for “control” of the same urban neighborhood.  Tony – an older, semi-retired, formerly active member of the Jets – meets Maria at a dance, and proceeds to fall in love with her.  But Maria’s older brother, Bernardo, just so happens to be the leader of the Sharks.  Bernardo warns Tony to stay clear of his sister, but their love is so deep that Tony and Maria continue to see each other in private.  When Bernardo finds out, the Sharks and Jets engage in battle – first fisticuffs, then switchblades, and later firearms.  By the closing credits, three principals have died in battle.  This is not your grandparents’ musical.

Loosely based on Shakespeare’s “Romeo and Juliet,” West Side Story featured some of the greatest music ever written for the Broadway stage, thanks to Bernstein and (in his debut) lyricist Stephen Sondheim.  “Tonight,” “Somewhere,” “Maria,” “America,” “Cool,” and even the comic relief number “Gee, Officer Krupke” have all become classics, and are still performed regularly by pops orchestras throughout the world.

West Side Story also features some of the greatest dance sequences ever filmed.  While you might find the idea of street thugs dancing to be a little out of character, be advised that Jerome Robbins’ choreography is masculine and bold.  And Wise (along with acclaimed cinematographer Daniel L. Fapp) employs a series of quick cuts during the dancing scenes – alternating our viewpoint between close-ups and long establishing shots (as we would see the dancing on a stage).

Wise was never considered the most artistic of directors, but his work really shines here.  He would go on to direct The Sound of Music, The Sand Pebbles, and The Andromeda Strain.  For my money, West Side Story remains the apex of his career, and stands as my favorite Hollywood adaptation of a Broadway musical.

My only qualm (and I suppose it is minor, considering it is the industry norm) is that big-name Hollywood talent was used in the film version, rather than Broadway performers.  I know the idea is to sell tickets, but you can’t tell me that Natalie Wood’s performance of Maria is better than that of Carol Lawrence in the 1957 stage original.  Likewise with Richard Beymer as Tony, George Chakiris as Bernardo, and Russ Tamblyn as Riff, the leader of the Jets.  The only Hollywood star who makes a lasting impression is young Rita Moreno as Anita, Bernardo’s girlfriend and Maria’s best friend.  Her “America” number practically steals the show.  She won a Best Supporting Actress Oscar for her performance, and Chakiris won Best Supporting Actor.

In a strange twist of fate, West Side Story won Best Picture for 1961, while the film adaptation of The Music Man did not win Best Picture for 1962.  In another odd coincidence, both Richard Beymer and Russ Tamblyn played important roles in David Lynch’s 1990-1991 television drama, “Twin Peaks.”

It is difficult for me to lavish enough praise on West Side Story.  It reinvented the musical form, giving it a tougher, grittier edge.  It featured as many memorable songs as “Fiddler on the Roof.”  And its fleshed-out, “larger than life” staging adapted perfectly to the big screen – especially given the wide-screen Super Panavision 70 technique which was popular during that time period.  Even if you don’t like musicals, you will love West Side Story.  Even though it’s 55 years old, I expect tickets to go quickly, as this remains one of the most popular screen musicals of all time.