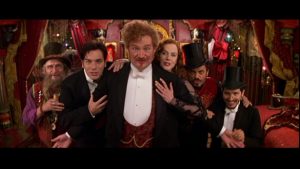 Later this summer, we have the opportunity to see what is without a doubt the weirdest motion picture musical ever made.  In 2001, director Baz Luhrmann released Moulin Rouge – not a remake of John Huston’s 1952 classic, but a different story which also happened to be set against the backdrop of the famous Moulin Rouge burlesque cabaret in late nineteenth century Paris.  While artist Henri de Toulouse-Lautrec is the protagonist of the earlier film, he is merely a supporting character in the Luhrmann vehicle.

The 2001 picture centers around a fictional character named Christian, an aspiring Scottish writer played by Ewan MacGregor (seen most recently in the Miles Davis biopic Miles Ahead).  Christian falls hard for Satine, an upper-class courtesan and the main star of the nightly show.  She’s played by Nicole Kidman, whose performance was nominated for an Oscar.  Christian takes residence in the bohemian section of Paris, where one of his neighbors is Toulouse-Lautrec.  But rather than painting, this Toulouse-Lautrec (John Leguizamo) and a troupe of downtrodden performers are attempting to produce a show to sell to the owner of the Moulin Rouge (a most out of character Jim Broadbent).  Christian helps them fine-tune the script, and Satine agrees to play the female lead.  But things go wrong, as Moulin Rouge evolves into a French farce, full of mistaken identities, improvised plots, and forbidden love.

It’s a lot of fun, and it reignited the musical as a motion picture force.  But Luhrmann makes a very odd directorial choice.  If the 1952 version was notable for anything, it was the schmaltzy “living strings” theme song, which became a #1 smash for bandleader Percy Faith.  But Luhrmann uses familiar late twentieth-century songs rather than employing Broadway writers to compose new material.  Thus, Christian proclaims his love for Satine by serenading her with Elton John’s Your Song, even though the Moulin Rouge cabaret actually closed in 1915 – thirty-two years before Elton was even born.  Debarge’s Rhythm of the Night and Nirvana’s Smells Like Teen Spirit also find their way into the soundtrack.  And in the film’s funniest scene, Jim Broadbent (of all acclaimed actors) serenades the crowd with Madonna’s Like a Virgin.  Because of its inclusion in Moulin Rouge, LaBelle’s 1975 hit Lady Marmalade hit #1 a second time in a high-powered rock/dance version by Christina Aguilera and others.

So what are we to make of this juxtaposition of musical eras with the film’s setting?  At first, I blamed Luhrmann for being too cheap to pay actual songwriters.  But as the film progressed, I found myself realizing that nothing in this production is sacred.  Yes, it’s a French farce, but its PG13 subject-matter brings a modern sensibility to the genre.  Yes, it’s a musical, but its music is instantly recognizable – even if we’ve never seen the film before.  Yes, it’s set in a 1900 French nightclub, but the camerawork is straight out of an MTV video.  Luhrmann (formerly an opera director) toys with every convention of screen musicals imaginable, and for the most part, succeeds in entertaining us.  The result is a wildly uneven, but ultimately pleasing piece of motion picture fluff.

The greatest legacy of Moulin Rouge is that its box office success mined the way for Hollywood’s reacceptance of the musical form.  Just a year later, Rob Marshall’s screen adaptation of Chicago became the first musical in 34 years to win the Best Picture Oscar.  Bill Condon’s Dreamgirls followed, winning Jennifer Hudson a Best Actress Oscar for 2006.  The musical was back, and Luhrmann was its unlikely trailblazer.

Fortunately, we have the chance to see Moulin Rouge Friday, August 5th, at the Indianapolis Museum of Art, as part of their outdoor summer series.  This film is new enough tickets may go fast, so please order them soon – and spend a strange yet enjoyable evening of music, dance, and silliness with the IMA.