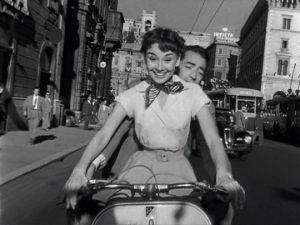 In 1952, director William Wyler signed Gregory Peck to play the part of Joe Bradley, an American reporter, exiled from the states now working for an American news service in Rome.  There he meets a princess touring various European countries.  The two share a lighthearted adventure played against the backdrop of one of the most romantic cities on the planet.  The film was to be called Roman Holiday, and the difficulty proved finding just the right actress to portray the princess.  Wyler had approached Elizabeth Taylor and Jean Simmons, but they were both tied up with other projects.  Via a screen test, Wyler settled on a young British actress by the name of Audrey Hepburn.  And the rest, as they say, is history.

Hepburn brought a touch of class to the role, as she would do throughout her career, coupled with a carefree, everyman quality not expected of a princess.  In fact, the underlying theme of Roman Holiday is the princess’ desire to escape the trappings of celebrity and exist as a mere mortal – at least for a while.  Given a sedative by her doctor to calm her increasingly frazzled nerves, Princess Ann falls asleep on a public bench, where she is discovered by none other than our reporter friend Joe.  Not recognizing Ann as a visiting royal, he offers her cab fare.  When she refuses, he lets her spend the night at his apartment.

The next morning, Joe leaves Ann on his couch while he reports to work.  Joe’s boss informs him his assignment (which ironically is to cover the princess’ stop in Rome) has been postponed because of illness.  Eventually realizing the princess is the woman asleep on his couch at home, Joe suggests obtaining an exclusive interview for the newspaper for $5000.  Convincing the princess of this arrangement proves to be more difficult than expected.  Spending the day in Rome (with a new short hairdo, so no one will recognize her), Ann and Joe see the sites and, dare I say, fall in love.  Fortunately, Wyler and screenwriter Dalton Trumbo (yes, that Dalton Trumbo) are too smart to allow such a wildly concocted plot to result in a lasting relationship.  Suffice to say that the princess must be content with her “normal” day in Rome.

This delightful film is unique in that it sounds like a screwball comedy, in the vein of Frank Capra.  But it really isn’t.  If I had to classify Roman Holiday, I’d call it a romantic comedy, even though the romance is more of a fling.  Can we call it a “fling comedy?”

This is the film that made Audrey Hepburn a star – and earned her a Best Actress Oscar for 1953.  It still stands as her best work, if for no other reason than her subsequent roles were all variations of Princess Ann.  Even penniless cockney Eliza Doolittle in My Fair Lady eventually became delightful.  In fact, “delightful” is the word that describes Audrey Hepburn most accurately.  She wasn’t necessarily a funny person, but her spirited personality lent itself to classy comedies like My Fair Lady and Breakfast at Tiffany’s.

As for Gregory Peck, mention Roman Holiday to anyone who was alive in 1953 and you’ll hear something like, “Audrey Hepburn was wonderful!”  But many people have forgotten that Gregory Peck was even in Roman Holiday.  Sure, he was great.  Peck was always great.  But Hepburn was the star here.  And in a true gesture of kindness (and perhaps of realization), Peck requested that Hepburn receive equal billing with him – even though (a) she was an unknown, and (b) Peck’s contract with Paramount mandated that he always receive top billing.

And as for William Wyler, he had a knack for getting as much out of his actresses as possible.  His films had already won Best Actress Oscars for Bette Davis (1938’s Jezebel) and Olivia de Havilland (1949’s “The Heiress), and now he could add Audrey Hepburn’s name to his list.  In 1968, a Wyler film would garner yet another Best Actress statuette when motion picture newcomer Barbra Streisand walked off with the award for Funny Girl.  He simply had a way with directing women that others (say John Ford, John Huston, or later Sam Peckinpah) did not.  Furthermore, Wyler’s films date well.  In other words, Roman Holiday still looks fresh and modern even though we know it was made in the 1950s.  It’s not full of the slang jargon or the trendy clothing of the era that often makes films seem old.

Fortunately, we have the opportunity to see Roman Holiday at the Indianapolis Museum of Art’s outdoor summer series on Friday, July 15th.  As these showings often sell out, get your tickets soon for one of the most “delightful” pictures of the ‘50s.