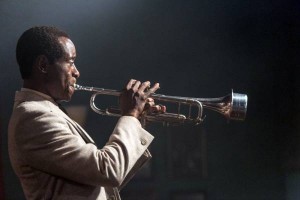 There have been three biopics of musicians this spring – I Saw the Light (about country & western legend Hank Williams Sr.), Born to be Blue (about jazz trumpeter Chet Baker), and now the best of the lot, Miles Ahead – director and star Don Cheadle’s tribute to the great jazz trumpeter Miles Davis.  This is Cheadle’s first time behind the camera, and he turns in basically a winner.  Davis was a musical genius cursed with a prickly, overconfident personality.  Once again, we have a motion picture tribute to a musician who suffered from drug abuse, womanizing, and (in this case) violence.  Not many musicians carry, and regularly use, loaded weapons.  Miles Davis did (at least per Steven Baigelman’s screenplay).

Part of Miles Ahead deals with the young musical prodigy and his brief marriage to Frances (played by Emayatzy Corinealdi).  We should expect this relationship to be unsuccessful, as it not only begins with Davis’ physical attraction to Frances, but he hands her his phone number when he’s on a date with someone else.  After enough episodes of philandering and narcotics addiction, their marriage implodes in an argument which features an interesting directorial choice.  Once we see where the scene is headed, the sound of the arguing characters is replaced by a particularly freeform jazz number from Davis’ early career.  This solidifies the association of Davis’ seemingly unstructured music with his quite similar personal life.

Another component of the screenplay concerns Davis’ “retirement” – the roughly 1976 to 1981 period when he had no musical output.  Miles Ahead surmises that Davis antisocially retreated into his home to stay high and occasionally produce very personal music which he refused to share with the outside world – even Columbia records, under which Davis was contracted.  This hermitic stage of his life resulted from the critical and popular outcry against his mid-1970s experimental period.

With nothing to show from their musical operative, a slimy Columbia executive (a perfect Michael Stuhlbarg) and his henchmen set out to steal any tapes Davis has produced during his isolation, and release them on an album.  Davis and a Rolling Stone reporter covering Davis’ life for a story (played by Ewan MacGregor) take matters into their own hands, and become pseudo-gangsters in an attempt to retrieve the stolen recordings.  While this narrative thread is mere speculation, it actually makes for the more interesting of the two stories.  Why?  Because we haven’t seen anything like it before.

My biggest problem with Miles Ahead is the common but annoying structure of following these two storylines simultaneously – one which occurred early in his career, and one which occurred later.  Remember The Godfather Part II?  The first couple reels featured Robert DeNiro as a young Vito Corleone first coming to America in the early 20th century.  The rest picks up the Corleone family saga after Vito’s death prompts the ascension of his son Michael (Al Pacino) to the throne.  Yes, the film was divided into two parts, but (a) that made it easy to follow, and (b) director Francis Ford Coppola trusted his audience to mentally connect various activity and character traits from the early sequence to the later one.  I would have preferred such a set-up for Miles Ahead.

Having said that, I was impressed with Cheadle’s juxtaposing the climaxes of the two story threads into one scene.  The older, wiser Davis and his entourage approach Columbia record executives at a prize fight, resulting in a display of violence, as the young Davis and his combo play in the boxing ring.  It’s a deft conclusion to a good biography.  And much as director and star Kevin Spacey did in Beyond the Sea, his 2004 biography of singer Bobby Darin, Cheadle occasionally drifts in and out of dream sequences.  This climactic sequence is the best of the fantasy scenes.  I must also implore you to stay through the closing credits.  The big “comeback” scene features Davis with his new 1980s combo.  The music is fantastic, and the double-exposed filming is to die for.

For that matter, Cheadle’s direction here is superior to his acting.  Miles Davis was a fairly static character – meaning he’s a talented yet pompous musician early in his career, and he’s still a talented yet pompous musician later in his career.  But aside from the simultaneous plots, it is Cheadle’s direction that shines in Miles Ahead.  Whether he ever directs another picture is his choice, obviously, but I’d like to see what he can do with a film in which he does not star, a la much of Clint Eastwood’s later work.

Don Cheadle has starred in two of the half-dozen or so best pictures so far this millennium – Crash (the best film of the past twenty years) and Hotel Rwanda (for which he deserved the Best Actor Oscar), both from 2004.  Miles Ahead doesn’t rise to this level, nor to the level of the two great musical biopics of 2004 & 2005 (Ray starring Jamie Foxx as Ray Charles, and Walk the Line starring Joaquin Phoenix as Johnny Cash), but it’s the best biopic so far this year, and a triumphant directorial debut from one of our most consistently great actors.

Andy Ray’s reviews also appear on the CineLife app, and he serves as a film historian for http://www.thefilmyap.com/