Born To Be Blue 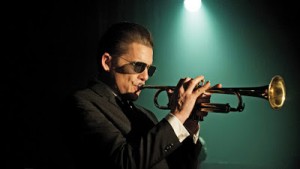 In summer of 2014, director Richard Linklater reignited Ethan Hawke’s career, providing him with his Oscar-nominated supporting performance in Boyhood.  Now, Hawke’s resurgence continues with his portrayal of jazz musician Chet Baker in Robert Budreau’s Born to be Blue – an uncompromising look at a once-promising career shattered by drug abuse.  While other notable jazz performers of the 1950s suffered from drug addiction, none of their career trajectories was as disrupted as Baker’s.  Over a half-century later, most of us can rattle off names like Miles Davis, Dizzy Gillespie, and Louis Armstrong.  Chet Baker?  Now that’s another story.  Only true jazz aficionados keep his name on the tips of their tongues.

So who was Chet Baker?  Ironically, I’ve seen Born to be Blue, and I’m not sure I know.  We learn early on that Baker was a naturally talented trumpeter, and that he willingly tried heroin as a young man.  Unable to break the addiction, Baker’s career took a nosedive from which it never fully recovered.  And that’s about all I can tell you.

Unfortunately, Born to be Blue suffers from the common biopic flaw of jetting back and forth between two time periods.  Here, the method Budreau utilizes is to have Baker star in a motion picture about himself and his early (1950s) career.  Such a motion picture was never produced; it is merely a vehicle employed to set the majority of Born to be Blue in 1966 – the year Baker was severely beaten by thugs anxious to be paid for a recent drug deal.  The beating left Baker without any front teeth, thereby ruining his embouchure and rendering him unable to play his trumpet.  Baker relearned to play with the use of dentures, and the bulk of Born to be Blue focuses on this portion of his life.

Budreau wisely depicts the 1950s in black and white, and the 1960s in color, but the jumps in time are still a little difficult to follow, much less necessary.  Why Baker’s story couldn’t have simply been told in a linear fashion is beyond me.  And when Baker loses his teeth, the fictional Hollywood movie thread is dropped, making its use appear even more awkward than had Budreau stuck with it as a form of structuring the story.  The only long-term consequence of the short-lived movie plot is to introduce Baker to Jane Azuka (played by Carmen Ejogo), who plays Baker’s former wife in the fake movie.  Baker and Ejogo develop feelings for one another, and they eventually wed.  But here again, Jane’s character is fictitious – described simply as a composite of several women in Baker’s life.  I believe a more interesting story would have been Baker’s actual life – with real people he knew and loved.

As far as the acting is concerned, I found Ethan Hawke’s depiction of Baker to be stilted at best, but I’m guessing Baker actually spoke in a high-pitched whine and chose his words cautiously.  Still, I felt like I was watching someone imitating Chet Baker than actually encompassing his character.  Furthermore, I know Hawke learned to play trumpet for this film, but I couldn’t tell.  His fingering looks phony, and he uses the third valve (that played by the ring finger) far more than required in real trumpet playing.  On Carol Burnett’s show, Harvey Korman used to caricature actors pretending to play piano without actually knowing anything about playing the piano.  While not to Korman’s exaggerated extreme, I feel like Hawke is doing the same thing here.

Having said that, I did like Hawke’s “imitation” of Chet Baker’s jazzy, albeit thin, singing voice – a technique he developed to give his embouchure a break when he was learning to play his trumpet again.  Hawke’s “My Funny Valentine” is a nostalgic and haunting ode to Jane.

Now Ejogo, on the other hand, is fantastic as the supportive but guarded wife.  She’s determined to make it as a Hollywood actress, while simultaneously keeping Baker on the straight and narrow.  Ejogo practically steals the show, and she’s indeed given more material to work with here than she was in 2014’s Selma, in which she played Coretta Scott King.  But I couldn’t help but wonder how well she would have played an actual acquaintance of Baker’s rather than a fictional “composite” character.

Born to be Blue lumbers along as just another biopic until the finale, when Baker is given one last chance to make an impression in the world of jazz.  Tapped to play Charlie Parker’s Birdland club in New York, Baker begs Jane to accompany him, but she’s busy preparing for an audition.  With his career on the line, Born to be Blue finally picks up some steam, and when it ended, I found myself wanting the film to continue.  I was finally interested!  If only Budreau had employed this level of enthusiasm in the first ninety minutes, he would’ve had himself a very interesting motion picture biography.