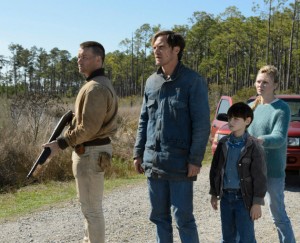 Jeff Nichols’ new film Midnight Special is his best yet, and it firmly cements his reputation as the best current director of supernatural films – a label formerly used to describe M. Night Shyamalan.  Again utilizing the acting talent of Michael Shannon, Midnight Special concerns the kidnapping of an eight-year-old boy with “special powers.”  No, he doesn’t hear dead people, but he does mentally connect with government satellites, and he decodes the information contained within.

So is the FBI chasing young Alton (relative newcomer Jaeden Lieberher)?  Yes, but the two men who kidnapped him are not with the FBI.  No, Alton’s kidnappers have removed him from the clutches of a religious cult whose followers believe the numerical sequences Alton spews forth will lead them to a world-changing event of some sort – perhaps the apocalypse.  The cult’s beliefs are partially correct.  While the second coming is not part of the equation, Alton does lead his captors to a celestial event.

To give away more information would spoil this picture for viewers, but suffice to say that I enjoyed how director and screenwriter Nichols begins the action in the middle of the story.  We’re thrown right into the thick of the action, as the kidnappers drive at night with their headlights off to avoid detection by the authorities.  As the plot unfolds, we learn that Roy and Lucas (the kidnappers) are actually Alton’s own father and his lifelong friend, a state trooper.  As you might expect, Shannon is perfect in the role of the distressed and concerned father, evading both the cult from which he and his son have escaped, but also the FBI, whose motives are less clear.  Joel Edgerton plays the state trooper friend, and he hits just the right notes as well – not concerned so much in a fatherly way, but as an accomplice who intends to pull off this stunt with as little conflict as possible.  Kirsten Dunst plays the boy’s mother, and Adam Driver shines as the FBI geek who actually makes sense of Alton’s numeric progressions.  Years ago, this is the role Jeff Goldblum would have played.

The action in Midnight Special unfolds quickly, and the film certainly held my interest throughout.  The ending is spectacular, but is true to the reality Nichols sets in the opening scenes.  I can safely say that I admired Midnight Special much as I did Steven Spielberg’s 1977 classic Close Encounters of the Third Kind.  That is some very high praise, and while Midnight Special isn’t quite in that league, the comparison serves as both a blessing and a curse.

Younger audiences will appreciate Midnight Special more than their elders, because they have no point of reference regarding the Spielberg film.  But for me, the parallels in the two pictures are so startling I can’t stop comparing the two – and that, my friends, is a curse.

Think about it.  Close Encounters played out on two levels – the smaller, more intimate story of a small-town electrical worker and his chance meeting with an alien lifeform, and the larger story of the U.S. Army’s attempt to (a) communicate with the aliens and (b) ensure no one else knows what’s going on.  Midnight Special also features the smaller, personal story of a father’s attempt to save his boy from something he doesn’t even understand, and the FBI’s attempt to (a) capture the boy and (b) cover up any other-worldy communication which may occur.

And while the comparison is certainly high praise for Midnight Special, I can’t help but not think of two aspects of Close Encounters that are missing from Midnight Special.  One is Richard Dreyfuss, and the other is Bob Balaban.  Dreyfuss was so exceptional as the Indiana electrical lineman he practically stole the show – from Steven Spielberg!  He embodied the everyman role with a sense of awe and wonder that he forced us to experience the film in his shoes.  Yes, without Dreyfuss Close Encounters would still rate as one of the greatest science fiction films ever, but with him, it rises to the level of one of the all-time greatest films of any genre.

In Midnight Special, Michael Shannon’s character is too mysterious and a little too deceptive to qualify as an everyman.  We like his character, but he doesn’t represent us the same way Dreyfuss did in the Spielberg film.

Also in Close Encounters, character actor Bob Balaban exhibited an equal sense of astonishment as the cartographer and government scientist whose enthusiasm regarding alien/human interaction almost matches that of Dreyfuss.  While Adam Driver’s character requires a more low-key performance in Midnight Special, he doesn’t allow us to experience his sense of wonderment with him.

So the question is begged:  Why would a young director make a film so similar to a classic?  I can understand if he wanted to rip off some dud from years ago.  Heck, a bad picture can always be improved on.  But Close Encounters?  No matter how great Midnight Special is, it will always pale in comparison.  Imagine a current film about an American man who owns a nightclub in a foreign country, who must choose between his love for a woman and helping her husband escape a military enemy.  It could be a great film, but it would always lose any comparison to Casablanca.  And that’s what we have here.

Andy Ray also serves as a film historian for http://thefilmyap.com/