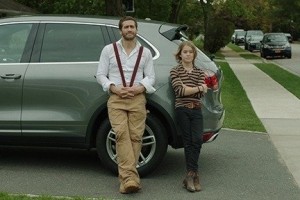 Jean-Marc Vallee’s latest picture, Demolition, features the one of the most implausible story lines I’ve ever seen.  Some Hollywood motion pictures feel “real.”  Yes, Richard Linklater’s modern-day classic Boyhood was a story written for the big screen, but it felt like we were watching real life.  By contrast, most Hollywood pictures feel “written.”  In other words, when characters feel the need to explain what they are doing and why, “real life” ceases to be a part of the equation.  And why do screenwriters resort to verbal clarification?  Usually, it’s because the plots they create could never happen in real life.  Let’s face it.  When Tom Hanks and Meg Ryan fall in love in Nora Ephron’s Sleepless in Seattle (1993), it’s cute, but real life doesn’t happen this way.  Too many circumstances conspire to lead their two characters together.

Written by Bryan Sipe, Demolition follows the life of Davis Mitchell (played by an earnest Jake Gyllenhaal), a successful New York investment banker who loses his wife in an automobile accident within the first minute of the film.  We all know there are many different channels people use to grieve.  But I can’t say I’ve ever witnessed anything like his.  At first, Davis goes about his work as though nothing had happened.  He explains to his boss (who just so happens to be the mourning father of the recently deceased) that he has a lot of work to do.  That’s not an uncommon initial reaction to a great loss.  But soon, Davis’ behavior becomes so erratic, his father-in-law pressures him to take some time off and seek counseling.

Within ten minutes of his wife’s death, Davis takes out pen and paper to write a complaint letter to a vending machine company, explaining that he did not receive the candy he paid for.  What should have been a brief composition becomes a five-page dissertation on his marriage.  Davis admits he’s not sure if he ever truly loved her.  Implausible?  Yes, but it informs us of the backstory we require since the film begins with the accident.

And although such letter-writing is often a form of therapy, very few people would actually mail the letter.  But Davis does.  Then he mails a second.  And a third.  Eventually, he receives a call from the company’s customer service representative.  At 2:00 in the morning!  Davis and the company agent, Karen (Naomi Watts), hit it off well.  Then they meet.  You see where this is going?  That it is farfetched would appear to be a plot contrivance to draw these two together.

Come to find out, Karen is a dope-smoking single mother, whose 15-year-old son Chris (newcomer Judah Lewis) has been suspended from school for setting off small explosives.  What do you wanta bet Davis and the boy hit it off well together?  Davis helps Chris learn the importance of a good education, and Chris helps Davis get over the death of his wife, right?

But this is where conventional wisdom is thrown out the window.  As a mentor of sorts, Davis turns out to be inappropriate at best, and downright harmful at worst.  He doesn’t care that Chris hates school and has a pernicious nature.  In fact, Davis utilizes Chris’ zest for destruction to completely eradicate the house he shared with his wife.  Again, these things only happen in the movies.  And this scene features the worst line of the film.  Davis responds to Chris’ inquiry, “What are we doing again?” with, “We’re destroying my marriage.”  See, Demolition refers to Davis’ need to destroy his previous life before he can move on with a new life.  By the time Gyllenhaal utters the line, I had long since figured it out.

But alas, the relationship between Davis and Chris turns out to be the only truly engaging aspect of this story.  The two become friends, as opposed to father/son, which is the only unexpected condition to the entire adventure.  Although the circumstances which bring Davis and the boy’s mother together are utterly ridiculous, I would have liked to have seen the relationship between Davis and Chris explored further.

Perhaps the greatest disappointment for me was that Vallee’s last two pictures (Dallas Buyers Club and the underrated Wild) were outstanding – and both based on real-life events.  Demolition was supposed to be released last fall.  Fox Searchlight must have known it would have been lost in the shuffle of superior Oscar contenders.  So they’ve released it now – in an attempt to find a brief shelf-life before the summer blockbusters hit.  By next Oscar season, Demolition will be long forgotten.