I Saw the Light 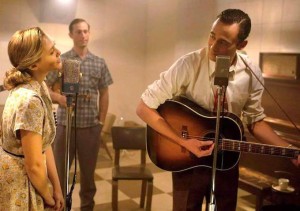 The other day my wife read that Michelangelo did not paint the entire Sistine Chapel ceiling by himself.  He had a staff working with him, but the images were of his own creation.  I joked that all Michelangelo had to do was sketch out his images and write in little numbers, so his staff would know which colors to use where.  In a way, I felt that way while watching Marc Abraham’s I Saw the Light – a biography of country music pioneer Hank Williams.  Abraham must have found a template for how to write a biography, and then inserted details the way a child might paint by numbers.

I Saw the Light gives us all the details of Williams’ adult life, but that’s it.  We never learn what was inside him.  What made Hank Williams tick?  I sat through a long (over two hours) laundry list of life events, but I still don’t understand Hank Williams any more than I understand George Jones.  Or Grandpa Jones.  Or any other country singer.  I Saw the Light begins with Williams’ marriage to Audrey, his first wife, manager, and occasional duet partner.  And right away, something is missing.  What drew these two young lovers together?  How did they meet?  How and why did they fall in love?  That information might have helped us better understand why their marriage dissolved a few years later.

Instead, we’re presented with a monotonous series of concerts, drunken rampages, and womanizing.  I realize each scene probably represents an actual manifestation of Williams’ life, but let’s face it.  When we’ve seen Hank get drunk a couple times, or hit on another young lady, we get the idea; we don’t need to see much more.  I would rather Abraham have concentrated on (a) Williams’ youth (in an effort to comprehend his adulthood), and (b) his music.  We see Williams sing – and again, I’m sure we’re introduced to his songs in the exact order he wrote them – but we never get inside his head enough to appreciate his songwriting prowess.  Yes, “Hey Good Lookin’” was a good song.  Audiences loved it.  But why did he write it?  I still don’t know.

As Williams, British actor Tom Hiddleston perfectly captures his physical attributes – tall, lanky, soft-spoken.  And Hiddleston (who does his own singing) sounds exactly like Williams – complete with that little high-pitched yodel that audiences (apparently) loved.  Unfortunately, we never learn how that vocal technique developed.  Was it a record executive who suggested it?  A fan?  His wife?

Elizabeth Olsen is also very good as the ever-patient Audrey, who eventually leaves Williams – although long after most women would have ceased putting up with his ways.  But while Olsen’s performance can’t be knocked, her role is simply “by the numbers.”  She’s the classic, forgiving spouse in a motion picture biography.  But given all her screen time, her role isn’t fleshed out.  When she finally files for divorce, we wonder what took her so long.

An irony of I Saw the Light is that Williams was only popular for six years, 1947-1953.  I wondered if there was enough material for a two-hour biopic.  Apparently, there is.  And we are subjected to every little detail – as opposed to an in-depth examination of a life which was undoubtedly more fascinating than that with which we are presented.  Contrast that to James Mangold’s powerful Walk the Line – his 2005 biopic of Johnny Cash.  Now I don’t know any more about Johnny Cash than I do Hank Williams, but Walk the Line gave me some idea as to what made Johnny Cash the man (and the icon) that he was.  Joaquin Phoenix and Reese Witherspoon are excellent as Johnny and June Carter Cash (just as are Hiddleston and Olsen), but their characters are much more fully developed.  In Kevin Spacey’s 2004 biography Beyond the Sea, he uses dream sequences to let us inside the mind of Bobby Darin.  By contrast, I Saw the Light plays like a network television memoir.

I found the ending to be particularly lacking in creativity.  First, we know Williams died in his car – of heart failure brought on by years of alcohol and drug abuse – at the tender age of 29.  But instead of seeing Williams die (and no, I’m not suggesting anything morbid), we see a teary-eyed Hawkshaw Hawkins inform an audience that the evening’s featured performer was dead.  Then the audience begins singing “I Saw the Light,” as a tribute to Williams.  But this is the first time we’ve heard this song in the entire film!  We’re not even sure it’s one of his numbers.  I don’t know if an earlier scene of Williams singing “I Saw the Light” ended up on the cutting-room floor, or if it was never included.  Either way, it makes for a sluggish conclusion.

Now I know I’m going out on a limb here, but in a way, there has already been a far superior biography of Hank Williams.  It never mentions Williams by name, nor is he even a character in it.  I’m talking about Peter Bogdanovich’s 1971 classic, The Last Picture Show – a coming-of-age story about graduating high school friends in a small, dying West Texas town in 1951.  They have their whole lives in front of them, yet they (mostly) have no idea what to do with them.  Their sense of isolation, fear, and resignation is personified by their car radios – each tuned to the big country music station in an unnamed city far away.  Almost every song in The Last Picture Show is a Hank Williams song.  Bogdanovich so deftly uses Williams’ music to personify the sadness and longing of his characters that Williams is practically a character himself.  The Last Picture Show actually lets us understand Hank Williams – through the escapades of bored, rural youth – in a way that I Saw the Light can only aspire to.