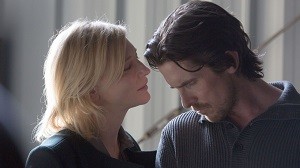 In tarot card reading, the Knight of Cups represents a creative dreamer, easily bored, who will soon find himself in a new romance.  In Terrence Malick’s new film, Knight of Cups, Christian Bale plays a creative Hollywood writer, very bored, who often finds himself in new romances.  But to say that this film is “about” anything at all really doesn’t do it justice.  Malick has never felt restrained by any conventional Hollywood storytelling model.  In Knight of Cups, he barely gives us any story at all.  Instead, Rick (Christian Bale) aimlessly wanders the streets, deserts, and beaches of Los Angeles, searching (we assume) for meaning following the death of one of his brothers.

In 1968, Malick’s youngest brother died of an apparent suicide, and the horror of this loss has set the undertone for two of his works – 2012’s Tree of Life and now this one.  Rick’s life has apparently ceased to exist – at least in a conventional fashion – since the tragedy, and now he snakes about, seeking nothing more than to feel something.  Anything.

All throughout Rick’s meanderings, we hear voice-over narration – often from Rick, but often from others in his life – his lovers, his father and living brother, and a mysterious British voice (Ben Kingsley) who sounds as though he might be a college professor Rick once knew.  Knight of Cups features far more narration than actual dialogue.  In fact, we frequently see Rick interacting with others as we hear them converse in voice-over, as if to imply that Rick is recalling a previous conversation with this individual.

Now if this doesn’t sound like the type of picture that interests you, it won’t.  Don’t see it.  This is strictly film-school/art-house fare.  On that level, Knight of Cups is brilliant. It is any film junkie’s dream.

The plot, such as it is, follows Rick’s love life through six women – each identified by different tarot card titles.  The most traditional of these women is Rick’s ex-wife Nancy, played by Cate Blanchett.  We sense that there is still a certain spark between the two of them, but we understand why Nancy is not interested in Rick – at least in his present state.

My favorite is the playful stripper, played by Teresa Palmer.  She possesses the spark that just might reinvigorate Rick’s life.  Unfortunately, she does not.  And Rick moves on.

Natalie Portman plays a married woman, apparently hurt by Rick in the past – but who begins to plan a life together with him for no apparent reason.  Then, just as soon as their connection is rekindled, the story angle is dropped.  It’s time to move on to another lover.  Another tarot card.  Another half-complete story arc.  Knight of Cups is to cinema what side two of the Beatles’ “Abbey Road” is to popular music – a series of incomplete ideas linked together, and sometimes doubling back on themselves.  We get the idea Rick wants to feel love again, but he simply cannot bring himself to the place of a deep human relationship.

Interestingly, Rick frolics with each of his women at the beach – the only esthetically pleasing venue in Rick’s life.  But these moments don’t last long.  And soon we’re back to his confused inland world.  It is also interesting that each of these women spends most of her time barefoot.  This may be to contrast their carefree outlooks with Rick’s symbolically shod shell of a life.  On the other hand, this might be a tribute to the great Spanish director Luis Bunuel, who had a passion for similar shots of barefoot women.

Wes Bentley plays Rick’s surviving brother, who (quite literally) tries to slap him into a state of feeling.  Brian Dennehey is Rick’s temperamental father – grousing about the way Marlon Brando did in his later pictures.  Armin Mueller-Stahl is a priest Rick visits, but to no avail.

The sound work is outstanding in Knight of Cups.  As Rick ambles through a backyard Hollywood party, we eavesdrop on various conversations – eventually solidifying on yet another voice-over.  Between the sound and the camerawork, Malick allows us to actually “become” Rick (and by extension, Malick himself) – at least as closely as any existing technology (save for virtual reality) will allow us to do.

As usual, Emmanuel Lubezki’s cinematography is beautiful.  This isn’t Days of Heaven (Malick’s 1978 masterpiece), but it’s close.  Ironically, it was Lubezki’s annoying tracking-shot cinematography that permeated Alejandro Inarritu’s Birdman and The Revenant.  Knight of Cups proves just how deft an artist Lubezki can be.  Most of the camerawork follows Rick in tight close-up, as we follow him from studio backlots to lovers’ lairs to his brother’s apartment.  In a rare twist for Malick and Lubezki, almost no establishing shots are utilized.  When we see Rick in a strip club, we don’t really know how he got there.  But then neither does he, we presume.  Layered in and amongst Rick’s mundane, “street-level-bound” world are strewn striking, dazzling images of Southern California – filmed on the sunniest, most cloudless days imaginable.  Why?  I’m assuming Rick’s mind wanders back to a previous, happier life.  Or he could be looking ahead to a rebirth of sorts.  But I love the fact that I don’t know for sure.  Malick doesn’t spoon-feed answers to all (if any) of our questions.  And I appreciate that.  Malick’s viewers are treated as intelligent, creative beings.

If I had to compare Knight of Cups to some other film, Federico Fellini’s autobiographical 8½ is the obvious choice.  Both are stories (told via loosely related vignettes) of filmmakers experiencing writer’s block brought about by tragedy.  But If Marcello Mastroianni’s writer’s block bothered you in Fellini’s 8½, wait’ll you see Christian Bale’s Rick.

I personally liken Knight of Cups to Richard Linklater’s 2001 animated stream-of-consciousness drama Waking Life.  In that picture, characters appeared to roam about, discussing existentialism, dreams, and the meaning of life with one another.  There’s a little of that in Knight of Cups, and the lack of narrative story line is similar as well.

Knight of Cups is obviously not going to be everyone’s cup of tea.  But while it will frustrate some viewers to no end, I actually enjoy the fact that Malick has abandoned what little lineal narrative structure he ever employed in his past work.  Here, Malick applies his artistic brush strokes to the easel of film without filtering it through a story of outlaws (Badlands) or war (The Thin Red Line) or anything else.  I don’t expect to be challenged like this at the movies for a long time – at least until the next Terrence Malik feature.