Where To Invade Next 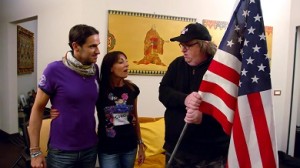 If someone told you Michael Moore’s latest film were titled Where to Invade Next, you’d probably assume it’s a documentary about America’s eagerness to invade other countries in our self-proclaimed role as the world’s police force. That would probably make for an interesting picture. But, you see Moore is “invading” other countries to steal their ideas and bring them back home to America – not what you might expect. And, not really a documentary.

When last we left filmmaker Michael Moore, he was skewering Wall Street in his 2009 documentary Capitalism: A Love Story. At the time, I complained that his film needed more focus, as it seemed to be all over the map as to its target. A year later, Charles H. Ferguson released a better, tighter, more fine-tuned documentary on the same subject (the 2008 financial meltdown and mortgage crisis) called Inside Job. As a Moore fan, I was a little disappointed, as he has produced the definitive narratives of American health care (Sicko), the George W. Bush administration (Fahrenheit 9/11), America’s obsession with firearms (Bowling for Columbine), and the systematic decline of American labor unions (Roger and Me).

Now Moore has returned with Where to Invade Next – a horribly-titled foray into the fundamentals of other countries and how we could learn from their governmental choices. I thought Capitalism: A Love Story was all over the map, but this time he doesn’t even stick with one subject.

Where to Invade Next takes Moore on a journey of (mostly European) countries which have mandated eight weeks yearly vacation (Italy), prepare gourmet food for school lunches (France), have abolished standardized testing in public schools (Finland), have decriminalized all drugs (Portugal), have shortened prison sentences for “hard” crimes (Norway), have mandated equality for women (Tunisia – yes, a Muslim country), and so forth. Moore cites two ironies: First, most of these ideas originated in America, and second, all these programs have met with astounding success.

And there, I believe, is Moore’s point. Other countries simply treat their citizens better than ours. Workers in other countries are seen as equals to management – and are regularly asked for their input on management decisions. Schoolchildren in other countries are healthier and better prepared to face the world – but their teachers are trusted, not belittled and micromanaged. Prisoners are treated with respect as human beings – not as cattle, to be herded from one room to another.

As you might expect, Moore doesn’t bother pointing out what these other countries do that might be inferior to the United States. But then, that’s not the point. Unlike what some believe, Moore does not hate America. In fact, he loves his country so much, he aches to improve it. The sad truth of Moore’s legacy will be that Americans continue to care very little about their country (specifically, their country’s politics), and what might be accomplished by instituting certain improvements.

While I wish Moore had focused on just one issue, he insists that these changes can happen – relatively quickly and painlessly. He uses the fall of the Berlin Wall in 1989, and America’s recent acceptance of gay marriage as examples of how quickly history can change. His ideas would seem to support the potential presidency of Vermont Senator Bernie Sanders – although Moore wisely never mentions his name, nor that of any other current candidate.

Again, Where to Invade Next is not Moore’s best work. It seems as though it was cobbled together quickly – which is ironic, because it’s been six years since Capitalism: A Love Story. Moore is at his best when he tackles one subject – a la universal health care in Sicko or the advantages of labor unions in Roger and Me. But I must mention one scene I absolutely loved.

First, let’s revisit Roger and Me. Moore’s first film featured the most powerful scene I’ve ever witnessed in a documentary. As General Motors CEO Roger Smith babbles on to his shareholders about the meaning of Christmas, Moore shows video of a sheriff deputy evicting a family whose father had recently been laid off when GM moved his job to Mexico – on Christmas Eve! As they remove their Christmas tree and few wrapped gifts and place them on the front lawn, we hear Smith expound on the generosity of the Christmas season.

I’ve been anxiously waiting for another scene in a Michael Moore film to carry this kind of weight. He’s done it (to a lesser degree) in Where to Invade Next. As we hear the staff of a Portuguese prison singing “We Are the World” on a video shown to all new inmates, we see horrendous images of the violent mistreatment of American criminals at our prisons. Moore hits a home run with that scene, if not with the entire film.

You might be aware that Where to Invade Next has not been nominated for Best Documentary. But, as I alluded to earlier, it’s not a documentary in the purest sense. There’s no investigative journalism going on here. Moore stages conversations with (undoubtedly handpicked) residents and business people of these countries and interviews them – but I could do that. I am anxiously awaiting Michael Moore’s next adventure in his quest to upgrade the land he loves – and I hope he actually investigates a big issue next time.

Andy Ray (a member of the Indiana Film Journalists Association) also serves as a film historian for http://thefilmyap.com.