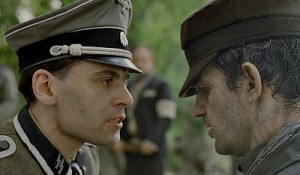 In Hungarian director Laszlo Nemes’ first feature film Son Of Saul, Geza Rohrig plays Saul, imprisoned at Auschwitz by the Nazis, but also a member of the Sonderkommando – a select group of Jewish prisoners who helped with the gassing of others. Although not directly involved in the deaths, Sonderkommando would usher others into the gas chambers, hand-clean the walls and floor following a gassing, and then dispose of the corpses. Because the Sonderkommando possessed knowledge of the chambers, they were isolated from the other inmates. Furthermore, Sonderkommando work did not exempt Jews from certain death. The sensitive nature of their work caused the Nazis to rotate Sonderkommando about every three months.

Knowing their fate, some of Saul’s Sonderkommando friends are actively planning an uprising and escape from the death camp. While mildly interested in participating, Saul’s heart is captured by that of a young boy who was able to survive a gassing. When the boy eventually perishes, Saul convinces the doctor (himself a prisoner) to not perform the required autopsy, but to surrender the boy to Saul – insinuating the boy is his own. Saul spends the rest of Son of Saul seeking a Rabbi to give him a proper Jewish burial – what the Catholic Church would refer to as “last rites.

It is unclear exactly why Saul develops such an interest in the deceased boy, although I believe he represents some last thread of human decency in what is otherwise a dismal and dreary existence. I particularly like two directorial choices Nemes makes.

First, his camera follows Saul exclusively. This is his film, and it is told through his eyes. Most of the time, the camera is placed just behind and to the side of Saul’s head. The effect is that we see everything Saul sees, when he sees it. While this technique frustrated me at first, I soon realized its purpose – which brings me my other celebrated directorial decision.

Saul’s life is not only dismal, but it is downright disgusting. An educated audience knows the backstory of the Nazi death camps. We don’t need to see a room full of naked prisoners dying of poisonous gas. We don’t need to see the pile of dead corpses. We don’t need to see the insides of the crematoriums. And we don’t. These visions are seen in blurry backgrounds while Nemes’ camera focuses on Saul. Sometimes it’s more terrifying to imagine these atrocities than to experience them in an “up close and bloody” style, the way, say, Alejandro Inarritu (The Revenant) would have done.

As the plot details of Saul’s search for a Rabbi and the pending escape attempt build, we follow Saul through the entire process – the gassing, the burning, and the disposal of the ashes. It’s not a pretty picture, and the Sonderkommando seem immune to its barbarity. While Son of Saul is not a particularly long film, I did eventually tire of seeing various Nazi authority figures pull Saul this way and that by his tattered jacket. I fully understand Nazi prisoners were poorly treated; I didn’t need to have that fact implanted in my head by Nemes. The ending, however, is superb, and it solidifies newcomer Laszlo Nemes as one of the great new European directors. He’s taken a downright unpleasant chapter in world history and shined a new light on its nefariousness.

Son of Saul is likely to win this year’s Best Foreign Language Film, and indeed, it is the only nominee to have opened in wide release. I still believe Christian Petzold’s Phoenix is a superior picture, but it wasn’t nominated.