Andy Picks The Oscars For 2015 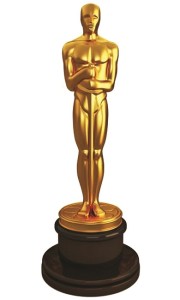 By way of review, 2013 was one of the greatest years in motion picture history, what with three films rising above the fray into what I like to call the “A+” territory. While Twelve Years A Slave was the best picture of the year, two others (American Hustle and Nebraska) could have won Best Picture in most other years. 2014, by contrast, was more a “normal” year for Hollywood. Only one film rose to the level of a true “A+” picture, and that was Richard Linklater’s Boyhood.

2015 was a banner year for the movies, with a slew of “A” and “A-“ films, but I’m not sure anything rose to that upper echelon of motion picture achievement. The best film of 2015 was Lenny Abrahamson’s Room, released last fall. It tells the harrowing story of a mother and son locked in a shed by an obviously deranged captor. The boy has spent his entire five years in this room. Eventually, mother and son escape and experience the struggles of adapting to the outside world. Young Jacob Tremblay gave the best performance of any actor in any role this year. His performance ranks with Tatum O’Neal in Paper Moon and Anna Paquin in The Piano as the best acting achievement by anyone under age twelve.

Which brings me to my annual review of the Oscars. Typically I begin with a look at the Best Picture and Best Director categories, but the omission of Jacob Tremblay from the Best Actor category necessitates embarking on our journey here. This year’s nominations appear to be designed to finally award Leonardo DiCaprio with an overdue statuette. Unfortunately, his performance in Alejandro Inarritu’s overrated The Revenant does not deserve this accolade. He should have won for 2013’s Martin Scorsese classic The Wolf of Wall Street, if not also for 2008’s Revolutionary Road (and he wasn’t even nominated that year). I’ve never liked the idea of “consolation prize awards,” and I like it even less when the two best nominees are eliminated from contention. (The other is veteran British actor Tom Courtenay in 45 Years).

My prediction: DiCaprio. This is the easiest category to pick this year. The other nominees may as well stay home. My opinion: Of the nominated actors, I’d choose Eddie Redmayne in The Danish Girl. Yes, he won last year for The Theory of Everything, but he’s at least as convincing this time around in a film that’s every bit as good. And who says the same actor can’t win two years in a row? Tom Hanks did. For that matter, so did Spencer Tracy. Brian Cranston in Trumbo is the other strong contender here. If it weren’t for Redmayne, I’d choose Cranston. Matt Damon’s created some buzz for The Martian, but I don’t think that’s a good enough film to warrant an award for Damon.

Oscars for Best Picture and Director

Since we’ve determined that DiCaprio will take home the Best Actor award, this might be a good time to deal with Best Picture. My fear is that the academy will bestow this accolade on The Revenant. This would mark the second year in a row they’d give the award to an Alejandro Inarritu picture, but they seem obsessed with him. There’s an outside chance (thanks to the Screen Actors Guild honor) the big prize will go to Tom McCarthy’s Spotlight, a riveting look at the Boston Globe’s investigation into the Catholic church’s cover-up of the child sex abuse scandal of the early millennium. I believe Spotlight is the far superior picture, although its heroes are journalists. Hollywood types have always been leery of the media, so The Revenant will take home the gold. I know this sounds like a silly reason not to award a film, but in 1976, neither Network nor All The President’s Men won Best Picture, although they were two of the three best films that year. And no version of The Front Page has won; nor did Philadelphia Story.

I must take this opportunity to mention that it’s a damn shame David O. Russell’s Joy is not nominated for Best Picture. Nor is Tom Hooper’s The Danish Girl. Both those films are superior to The Big Short and The Revenant, which do appear in this category.

So the winner for Best Picture: The Revenant. My pick: Room. And the winner for Best Director: Alejandro Inarritu. My pick: George Miller for Mad Max: Fury Road. The director was the true star of this visionary epic, which almost matched the brilliance of 1981’s The Road Warrior, which was my favorite film that year. I’m surprised the academy nominated Miller, but since they did, I’m pickin’ him!

So Jacob Tremblay wasn’t even nominated for Room. And Best Picture will probably go to The Revenant. So what’s left for Room? Brie Larson. She gave the best performance of the year by an actress, so she’d have my vote. Plus, Room is such a powerful film, the academy will almost feel obliged to award it something. Larson is their ticket. Her performance as the strong but loving mother was heart-rending and solid. This Oscar is another shoe-in.

However, I must acknowledge two other outstanding performances in this category – the best category of the year. Had Room never been released, Irish actress Saoirse Ronan would deserve this award for her diffident yet tenacious turn as an Irish girl adapting to 1950s American life in Brooklyn.

The other exceptional performance here is Jennifer Lawrence in David O. Russell’s Joy. She just won three years ago for another Russell vehicle, Silver Lining Playbook, and she made a strong case for a Supporting Actress Oscar the following year for Russell’s classic, American Hustle. But her role in Joy is her meatiest, and it solidifies her as one of our greatest young actresses. And there’s no reason she can’t win twice. Again, I believe the academy should award individual performances – not careers.

I must take this opportunity to mention that Cate Blanchett is also a Best Actress nominee for Carol, even though the nomination should have gone to Rooney Mara for the same film.

So the winner here: Brie Larson. And this time I actually agree with them. I’d pick her too.

This is another surprisingly easy category to predict this year. While the three best performances in here should actually be considered Lead Actresses (Rooney Mara in Carol, Alicia Vikander in The Danish Girl, and Kate Winslet in Steve Jobs), the clear winner, to me, is Vikander. Not only does she hold her own against the great Eddie Redmayne, but the way she shows her feelings through facial expressions is remarkable. We know what she’s thinking at all times, and Vikander shows us the inner conflict of her character – the wife of a transgendered man. Given her success in other awards ceremonies, I predict the academy will also award Vikander.

Now things get dicey. This is by far the tightest acting race of the year – not for me, but for the academy. My vote’s a no-brainer.  It goes to character actor Mark Ruffalo in Spotlight. While this was a true ensemble effort, Ruffalo’s character experienced the inner turmoil of breaking a major story about crimes of the Catholic church versus his own upbringing in that very church. All the characters dealt with this dilemma, but not more effectively than Ruffalo’s. He’s been excellent in darn near every film in which he’s starred. I’d make this his year.

And the academy may too. But they’ve got two other possibilities that I despise. First is Tom Hardy for his antagonist bad-guy role in The Revenant. My problems with Hardy are (a) he hates Leonardo DiCaprio’s character throughout the long picture, but for no apparent reason – Where’s the backstory to his character?, (b) his character is static, meaning he’s bad at the beginning and he’s still bad at the end; the character doesn’t evolve during the course of the film, and (c) Hardy’s diction is so poor I could hardly understand him. Perhaps this is a directorial choice, but it’s not a good reflection of Tom Hardy. Still, my prediction is that the academy will love The Revenant so much they may give the award to him.

And another strong possibility is Sylvester Stallone for his trainer role in Creed. While this may be a popular choice, I see no reason to award a man for playing the same character he’s played for four decades simply because his role changed from fighter to coach. The character Rocky has never been very interesting anyway – although the first Rocky film was a treat.

So the winner: Hmmm… I almost can’t pick. All I can tell you is it won’t be Christian Bale for The Big Short. British actor Mark Rylance is a long shot for Bridge of Spies, although, like Ruffalo, he would at least be deserving of the honor. My pick: Ruffalo.

Other Categories and Conclusion

The screenplay awards are easy this year – Room for adapted and Spotlight for original. Those are my pics as well as (most likely) those of the academy. Anomalisa is a runaway for Best Animated Feature, although Inside Out was good. There’s a tiny chance they’ll give the Oscar to Inside Out because they don’t want “adult” films in what is traditionally a category for family films.

For Cinematography, I’d again award Mad Max: Fury Road, although the academy will probably give it to The Revenant – I can’t imagine why, but they will.

My biggest issue with the remaining categories is the glaring omission of Christian Petzold’s remarkable Phoenix from the Best Foreign Language Picture race. Son of Saul should win here, but by eliminating its best competition they’ve “dumbed down” the contest.

So we’re in for another torturous night of awarding an undeserving Alejandro Inarritu film – Birdman last year; The Revenant this. My favorite moment will be seeing Brie Larson win a well-earned Best Actress Oscar for Room, the real best picture of the year. My most pleasant surprise would be to see Mark Ruffalo win Best Supporting Actor for the magnificent Spotlight. What are your thoughts? Please feel free to share your thoughts in the “Contact Us” field or find me on Facebook under Andrew Ray.

Andy Ray also serves as a film historian for http://www.thefilmyap.com/.