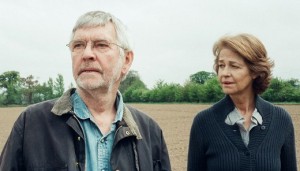 Sometimes I enjoy watching actors act. Such is the case with Andrew Haigh’s 45 Years – a moving drama starring veteran British stage and screen actors Tom Courtenay and Charlotte Rampling. While Haigh’s screenplay isn’t quite perfect, it hardly matters in the presence of these two accomplished masters.

Courtenay and Rampling play Geoff and Kate Mercer, a childless couple living in the British countryside, but nearby a small unnamed city. Because of Geoff’s heart surgery five years earlier, the couple is planning a big 45th anniversary bash at a local reception hall. Geoff receives word that his ex-girlfriend’s body has been found in the Swiss Alps where she died on a hiking expedition 50 years ago. Geoff apparently had deep feelings for Katya, who died before he ever met Kate. While Kate knew about Katya, the subject of Geoff’s relationship with her has never been discussed. Until now.

The bulk of 45 Years concerns the anniversary party planning on the one hand, and the increased marital tension caused by the resurrection of Katya. Just as the Mercers should be welcoming one of the happiest moments of their life, their long relationship experiences challenges they never thought they’d face.

While 45 Years is deliberately paced, it’s hard not to pick sides between Geoff and Kate. As a man, I was more in tune with Geoff’s week of reminiscence of a long lost love which ended tragically. I believe Kate overreacts to Geoff’s need to be alone with his thoughts, yet she has a point – he needs to “snap out of it” before the big party. To see Courtenay portray the conflict within Geoff is truly a thing of beauty. This is easily his meatiest screen role since playing opposite Albert Finney in The Dresser back in 1983. Rampling’s Kate is a study in British understatement. While she’s not much for big galas, and she certainly doesn’t feel comfortable as the center of attention, she realizes her friends expect a certain public decorum, which she is obliged to give. She loves her husband dearly, yet grapples with his interest in anyone other than her – even if that person has been dead since the 1960s. I found Kate’s character too possessive – particularly for a couple who has been happily married for 45 years. Her inner discord is subtle yet still overdone, I believe. On the other hand, there wouldn’t be a movie without some kind of conflict.

Rampling has received a well-deserved Best Actress nomination, but how Courtenay could be overlooked is beyond me. His performance ranks alongside that of young Jacob Tremblay in Room as the best of the year – yet neither is nominated. Hmmm… Perhaps they’re trying to remove competition from Leonardo DiCaprio?

In any event, 45 Years is one of the year’s best films, in part because Haigh’s screenplay doesn’t tie up our story in a nice little bow the way Hollywood is wont to do. The ending is somewhat ambiguous, and for that I am grateful. Haigh challenges us to be a smart audience; he doesn’t dumb down for the masses. Without giving anything away, you’ll marvel at the somewhat unexpected way Kate and Geoff handle their anniversary celebration. Again, I found Geoff’s actions and attitude at the end to be perfectly normal, but then I am male. I’d love to hear a female perspective on Kate’s frame of mind at the end of 45 Years.

I particularly loved how the camera stays with the Geoff and Kate as they dance to the Platters’ “Smoke Gets In Your Eyes.” Haigh doesn’t allow us to see much of the guests dancing in the background, and that’s a smart directorial move. Courtenay and Rampling speak volumes during this dance scene without uttering a word. Watch their faces.

The Mercer’s relationship forever changes during the course of 45 Years. And that’s unfortunate, given that Geoff appears to be near the end of his. I typically hate sequels, but I’d love to know what happens to these two characters. And again, Charlotte Rampling, and especially Tom Courtenay, are remarkable. I invite you to take 90 minutes out of your day and watch these two experienced geniuses at the absolute top of their craft.

Andy Ray also serves as a film historian for http://www.thefilmyap.com/.