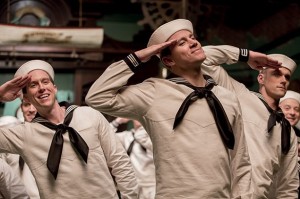 I always approach Joel & Ethan Coen’s films with a heightened sense of anticipation. They have been two of the most quirky, unique, and brilliant directors of the past three decades. The Coens specialize in small, “artsy” pictures which sometimes appeal to a mass audience. Some of their films are classics (Raising Arizona, Fargo, No Country For Old Men). Others must have looked great on paper but failed to make an impression on the screen (Miller’s Crossing, The Hudsucker Proxy). Most fall somewhere in between. Such is the case with their latest – Hail, Caesar! , a comedy celebrating the golden years of Hollywood.

Hail, Caesar! follows studio head Eddie Mannix, played by a toned-down Josh Brolin. Mannix (whose life is often presented to us with the aid of a British narrator that sounds like he came straight out of a 1950s motion picture) spends his long, busy days putting out fires – dealing with a top-notch British director who’s been coaxed into using a no-talent cowboy star in his new film, covering up the out-of-wedlock pregnancy of his pristine swimming star, and locating the kidnapped major star of the studio’s latest Biblical blockbuster. Mannix is the star of Hail, Caesar! and, while possessing a certain degree of self-doubt, always knows exactly how to handle each situation.

Unfortunately, the primary story is not only uninteresting, but unfunny. George Clooney plays Baird Whitlock, a somewhat dimwitted lead actor currently shooting a Roman/Biblical historical picture called “Hail, Caesar!” A group of communist screenwriters kidnaps Whitlock just before the big final scene is scheduled to film. Seemingly unconcerned about his fate, Whitlock hears the demands of the communist writers, doesn’t particularly understand, then proceeds to spend the next couple days jaw jacking with them about his Hollywood experiences and connections.

I’ve never liked George Clooney playing dumb. He’s simply too smart to dumb down like this – and the Coen brothers always seem to use his talent in such a manner. Sorry Vacation fans, but I always had the same issue with Chevy Chase. Some actors are simply better playing it smart. Furthermore, while some Hollywood writers during the 1950s were communists (see the recent superior film Trumbo), the idea that a group of them would go to such extremes to make a point is preposterous. The late sequence involving their leader boarding a Soviet submarine in California waters is so ridiculous, I was actually embarrassed for the Coens. This story should have been scrapped and replaced with something lighter, which might have matched the tone of the rest of the picture.

Now, what does work in Hail, Caesar!? Darn near everything else. Scarlett Johansson plays an Esther Williams type aquatic musical star who requires Mannix’s assistance to conceal her pregnancy, which not only occurred out of wedlock but (she believes) to a man she has no interest in marrying. The swimming sequence is actually very good, albeit more pornographic than those of Esther Williams. And Johansson’s character reminds me of Crusty the Clown from “The Simpsons” – beautiful and elegant on screen, and a bitch once the cameras turn off.

The best sequence is a musical number from a sailor film starring the eager Channing Tatum. Where Mel Brooks would have poked fun at Hollywood musicals of yesteryear, the Coens celebrate their long-lost magic. It’s a delightful number, and I would have liked to have seen another one.

The funniest storyline features Alden Ehrenreich as a cowboy actor promoted to leading man status in a stately period piece directed by famed British master Laurence Laurentz, a classically stuffy Ralph Fiennes. Fiennes futile attempts to teach the young stuntman how to act are priceless. Fiennes is as good here as he was in last year’s The Grand Budapest Hotel. And Ehrenreich’s character turns out to be not so dumb after all.

There’s a single amusing scene starring Frances McDormand as a film editor, but Jonah Hill is wasted in his brief cameo as a studio “fix-it” man. Likewise, I didn’t particularly care for Tilda Swinton’s over-the-top twin gossip columnists, each looking for their next big story.

As Mannix, Brolin superbly holds all this madness together without coming off too heavy-handed, the way he might in a more serious picture. Hail, Caesar! is a comedy, and Brolin treats it as such.

I only wish the Coens had put a little more work into this film. It has the makings of a classic, but it’s not there yet. Its means is greater than its end. Now, why would Universal release Hail, Caesar! so early in the year? I surmise the expectation is that Hail, Caesar! will be this year’s The Grand Budapest Hotel – a sharp comedy which appeals to a more adult audience and continues to do strong business through the summer months, as it competes against the superhero blockbusters. They could be onto something. This approach might just work. On the other hand, Hail, Caesar! could be gone from the local cineplex before March. Neither would surprise me. I wanted to like Hail, Caesar! a lot. And again, much of it is stellar comedy. But it’s still a bit of a swing and a miss for the Coen brothers.

Andy Ray film reviews appear on TheFilmYap.com, where he also serves as film historian for the website.