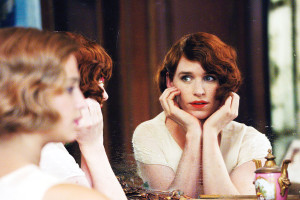 Eddie Redmayne was a bit of a surprise Best Actor winner at last February’s Oscars. While he was remarkable as noted physicist Steven Hawking in The Theory Of Everything, he was a virtual unknown – and virtual unknowns rarely take home any of the major acting awards. This year, the British actor turns in another brilliant performance as artist Lili Elbe – the recipient of the first gender reassignment surgery – in Tom Hooper’s inspiring film, The Danish Girl.

Adapted from David Ebershoff’s 2000 novel of the same name, The Danish Girl tells the story of Danish painters Einar and Gerda Wegener – a seemingly happily-married couple who, in a particularly flirtatious moment, decide to attend a party as two women. While Gerda “creates” Einar’s cousin Lili as a lark, Einar himself becomes increasingly fascinated with wearing women’s clothing, walking and talking like a woman, and “becoming” Lili at various turns throughout the day.

While in Paris to show some of her work, Gerda tracks down Einar’s childhood friend Hans, who was the first male to kiss Einar. While falling for Gerda himself, Hans agrees to help Einar find psychologic help. Enough mental health experts tell Einar he is insane (This is 1926, after all) that he considers going home to Copenhagen. Then the trio happens upon one last doctor – Kurt Warnekros, a pioneer in gender reassignment surgery. And as a side note, in 1926 actual surgeries were performed – as opposed to the series of hormone injections more common today.

Once again, Redmayne is brilliant as Einar/Lili. Of those nominated, he probably deserves to win Best Actor a second straight year. My fear is the academy will award Leonardo DiCaprio for Alejandro Inarritu’s overwrought epic, The Revenant – simply because he “deserves” it by now. But based on the performances themselves (all Hollywood politics aside), Redmayne’s is a better achievement.

The real find here is Alicia Vikander as Gerda. Nominated in the Best Supporting Actress category, even though she’s as much as “lead” in this film as Redmayne (and shares equal screentime), Vikander flawlessly walks a fine line between anger toward Einar and sympathy for him. As a progressive thinker (for the 1920s), Gerda tries to understand Einar’s desire to change genders, while simultaneously realizing she’s soon to lose her husband – whom she loves dearly. In lesser hands, this role could have been played either too emotionally or too stoical. Vikander hits just the right notes, and probably deserves to win in her category as well.

Much as with Todd Haynes’ Carol, The Danish Girl tackles a modern-day issue utilizing a story from the 20th century. Again similarly to Carol, The Danish Girl is a quiet, peaceful picture, in which certain segments of time pass as musical interludes – devoid of dialogue, yet filled with the facial expressions of the characters to let us know their current feelings. Again, Redmayne and Vikander excel at this “body language” acting.

While probably not in my top five pictures of 2015, The Danish Girl is an excellent (and non-offensive) picture highlighting the intrinsic desire some have to live out the rest of their days as the other sex. In many ways, it’s similar to Carol, but this is a better film. And it further cements Tom Hooper’s status as perhaps the best active British director alive today. Following The King’s Speech and Les Miserables, The Danish Girl is another first-rate winner from Hooper.